Everyone experiences fear and anxiety in their lives, but for a large number of people, anxiety can actually interfere with daily tasks and make it difficult to function normally. Anxiety disorders are considered to be the most common form of mental illness in American adults aged 18 and older, affecting 40 million people a year, according to the Anxiety and Depression Association of America (ADAA).

Individuals battling an anxiety disorder may also be at least twice as likely to develop a substance use disorder (SUD) related to drug or alcohol abuse, than the general population, Psychiatric Times publishes. The National Survey on Drug Use and Health (NSDUH) reported that in 2013 more than 8 percent of the adult population (over age 12) in the United States were considered to have a substance abuse or dependence issue. Between 33 and 45 percent of individuals with an anxiety disorder may also be classified with a simultaneous SUD, according to Psychiatric Times. Similarly, the Carlat Psychiatry Report publishes that 45 percent of individuals with an alcohol use disorder also may have a co-occurring anxiety disorder.

When two disorders, such as an anxiety disorder and addiction, or a substance abuse disorder, co-occur, they are said to be comorbid disorders. Most professionals agree that integrated treatment best enhances recovery.

When someone feels stressed, or is in a potentially dangerous situation, the brain sends out chemical messengers, called neurotransmitters, to enhance certain central nervous system functions. Heart rate and blood pressure speed up, palms may get sweaty, and concentration and focus may be heightened. Adrenaline and endorphin levels may increase as the body prepares for a fight-or-flight reaction.

When someone suffers from an anxiety disorder, these feelings of fear or anxiety, and the body’s response, may be perpetual even when there is no threat of danger. Nerve activity is heightened, and an individual may feel constantly “on edge,” jittery, worried, and nervous, for no apparent reason. Irritability, anger, paranoia, and feelings of apprehension and expectation of the worst-case scenario may be psychological symptoms of an anxiety disorder. Physically, someone may have trouble sleeping, suffer headaches, be short of breath, have a rapid heart rate, be nauseous, sweat a lot, be extremely tense, experience tremors, and feel the frequent need to urinate when an anxiety disorder is present. The National Alliance on Mental Illness (NAMI) states that, in most cases, an anxiety disorder is apparent before an individual reaches the age of 21.

There are four main types of anxiety disorders:

Reasons for Comorbid SUD and Anxiety

Anxiety is also often a side effect of alcohol or drug withdrawal that occurs when an individual is addicted to or dependent on alcohol or drugs and the substance leaves the body or is removed. This is generally considered substance abuse-induced anxiety and may actually cause or create an anxiety disorder. Almost three-quarters of the time, however, the anxiety disorder came before the substance use disorder, the journal  Psychiatric Times reports. This may be related to similar brain regions being involved in both the development of an addiction and an anxiety disorder, or because both are often developmental disorders, occurring before the prefrontal cortex and parts of the brain involved in the regulation of moods is fully formed. Genetic factors may be at play and some people may be more apt to develop a SUD and/or an anxiety disorder than others.

Rates of specific anxiety disorders and drug or alcohol dependence in the past year, according to a 2008 survey published by Psychiatric Times include:

Marijuana, as well as many drugs and alcohol, can act as central nervous system depressants, slowing down the hyperactive nerve activity that may accompany anxiety. This may provide a temporary reduction in anxiety symptoms, and drugs or alcohol may become a method of self-medication for anxiety.

Substance abuse can create its own issues, however, even when not accompanied by a mental illness. Addiction is when an individual no longer has control over use of drugs or alcohol. Substance abuse may take over many aspects of life, potentially causing a drop in job performance or schoolwork, financial difficulties, trouble with the law, health problems, social withdrawal, issues within interpersonal relationships, and increased risk-taking or self-destructive behaviors. Repetitive abuse of a mind-altering substance changes the chemistry in the brain that is related to positive emotions and mood regulation. Withdrawal and cravings may start when the drug is then removed as these chemicals are no longer produced or present at previous levels.

Anxiety and depression are common side effects of withdrawal. While substance abuse may seem to provide a short-term solution for anxiety symptoms, in reality, drug and alcohol abuse will actually make these symptoms worse in the long run. 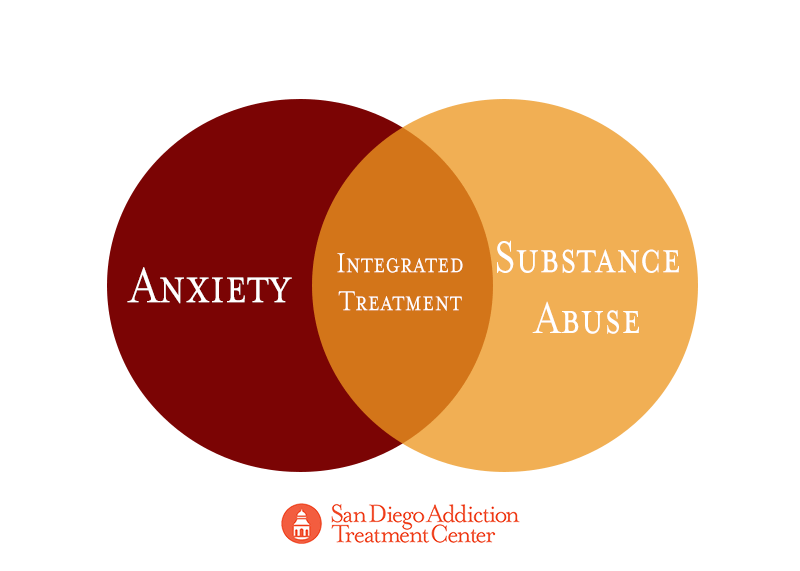 Since anxiety and substance dependence can be so complexly intertwined, medical and mental health professionals will need to work together to treat both issues. Medications like benzodiazepines are commonly prescribed to treat anxiety as they are sedative-type drugs; however, they too can be addictive. As a result, an individual with a comorbid substance abuse disorder or history of addiction may not want to take these drugs.

Alternative options may be serotonin reuptake inhibitors (SSRIs) like sertraline (Zoloft) or paroxetine (Paxil), which are antidepressant medications that may also reduce anxiety symptoms and substance withdrawal side effects. Serotonin and norepinephrine reuptake inhibitors (SNRIs) may also be effective for treating anxiety disorders, as both SSRIs and SNRIs work by altering brain chemistry to reduce anxiety and increase levels of serotonin or norepinephrine in the brain that may be depleted in someone with suffers from chronic anxiety or addiction. Examples of these medications, Mayo Clinic reports, that are commonly used to treat anxiety include escitalopram (Lexapro), venlafaxine (Effexor XR), and duloxetine (Cymbalta). Buspirone (BuSpar), an anti-anxiety medication, may be effective in the treatment of both an alcohol use disorder and a comorbid anxiety disorder as well.

Withdrawal from drugs or alcohol can be intense and even life-threatening in some cases. Therefore, medical detox is the optimal choice for someone dependent or addicted to psychoactive substances. Medical detox is generally done in a specialized facility, in a residential capacity, where individuals are closely monitored to ensure their safety. Medications may be used to contain and reduce specific symptoms of withdrawal as well as potential drug cravings. Some medications may also be effective for preventing relapse during recovery also. While medications may be effective at reducing acute symptoms, managing alcohol or drug withdrawal, mitigating cravings, and potentially preventing relapse, effective treatment will also include therapy methods as well.

Substance abuse is often a way to avoid anxiety symptoms, and therapy methods can teach individuals how to face these symptoms head on and learn how to better deal with them instead of employing an avoidance strategy that most likely will be ineffective long-term. By better understanding what may act as a personal trigger for anxiety symptoms, CBT can provide individuals with coping mechanisms to handle symptoms as they arise. CBT also increases the awareness of the connection between thoughts and actions; by changing certain thought patterns, behavioral changes will soon follow.

Relapse prevention strategies and support groups may be helpful and integrated into therapy and treatment plans for both anxiety and substance abuse as well. Just as no two people are exactly alike, no two recovery plans are exactly the same. Integrated treatment for comorbid anxiety and addiction should therefore be tailored to each individual’s specific set of circumstances. Medical and mental health professionals should all work together to devise a comprehensive treatment plan to foster sustained recovery from both addiction and anxiety.