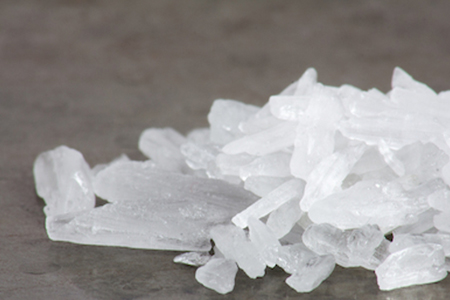 Methamphetamine, or meth, may be one of the most abused drugs by Californians. Around a half-million residents are estimated to use this highly addictive and illegal stimulant drug.[1] Meth is a stimulant drug synthesized in illicit laboratories from everyday materials and cold medicines containing ephedrine or pseudoephedrine.

California’s Central Valley is considered one of the hubs for meth distribution in the United States. This rural farming area may be home to the majority of American “super labs” that can “cook” up to 150 pounds of meth at once. The drug’s potential for abuse and easy accessibility within the region make it the top drug threat in the Central Valley of California.[2]

Meth, also called crank, chalk, or speed, may also be formulated into a crystal form called crystal meth, Tina, shards, glass, or ice on the street. Much of the meth in the United States may be coming across the border from Mexico. Seizures at the Southwest Border, which includes regions of California, Texas, New Mexico, and Arizona, increased 200 percent between the calendar year (CY) 2009 to CY 2013. Mexican ice as it is often called may be common in California. Additionally, meth may be smuggled across the border in liquid form to be converted into usable drugs within the state as well.[3]

Meth speeds up heart rate, blood pressure, and body temperature, and it may make individuals feel invincible, energized, and wide awake for hours on end, lasting up to 50 times longer than cocaine.[4] Meth disrupts some of the neurotransmitters in the brain resulting in intense euphoria, or a high, and sometimes psychosis. When individuals use meth regularly, they may become chemically dependent on the drug and form a physical and psychological addiction wherein control over drug use no longer exists.

Stimulant drugs, which meth is, were the primary drugs of abuse in more than 30 percent of public substance abuse treatment admissions in California in 2011, making stimulants the number one reported class of drugs cited by those seeking treatment for drug abuse or addiction in the state.[5] Many regions in California may be noticing an increase in meth treatment admissions, which may correlate to rising abuse trends.

Effects of Meth Abuse and Addiction

Meth may be commonly heated and smoked or injected in crystal form, and injected or snorted in powder form. Meth can overload the body if too much is taken at one time for the system to handle, resulting in overdose. The San Diego Medical Examiner’s Office reports that the number of deaths from meth overdoses increased from 83 in 2008 to 142 in 2012.[10]

Illicit drugs are not commonly cited when people call poison control for help; however, out of the 11 percent of calls received by Los Angeles area poison control centers involving illicit drugs, meth abuse accounted for the largest number, at 3.4 percent, of all illicit drug-related calls in 2013.[11] Meth abuse and addiction are also the cause of many emergency department (ED) visits or hospitalizations for various health concerns, including cardiovascular complications, stroke, brain damage resulting in psychosis, liver or kidney damage, respiratory issues, dental problems including “meth mouth,” skin legions or sores, infections, contraction of infectious diseases such as hepatitis or HIV/AIDS, and more. As many as 30-50 percent of those newly infected with HIV abuse meth in California, as HIV may be transmitted through the sharing of dirty needles or through unsafe sexual encounters.[12]

Meth addiction is a disease impacting all facets of a person’s life, and behavioral changes, mood swings, and erratic behavior may be common. Job and school performance may slide, and families may suffer financially as whatever money may be coming in may be going to buy drugs or support the drug habit. Sleep and eating habits are forcibly changed due to regular meth abuse. Someone battling meth addiction is likely to need help to safely withdraw from the drug in order to reestablish a healthy physical balance and manage the lows that may come when the drug is removed.

About 40 percent, or more, of studied meth abusers were unable to control their behaviors while taking the drug, and mothers being investigated by child welfare services who abused meth in California were on average, less educated, younger, less likely to have been through a substance abuse treatment program, and more likely to have a criminal record than other mothers being investigated.[16]

While there may not be any specific statistics on the number of crimes committed due to meth impairment or in an effort to fund a meth habit, the link between meth abuse, violence, and crime is clear. Law enforcement agencies regularly report that meth contributes to violent crimes and theft at high rates.[17]

In San Diego County, 47 percent of adult female arrestees in CY 2012, 31 percent of adult male arrestees in CY 2012, and 4 percent of juvenile arrestees between 2011 and 2012 tested positive for meth.[18] In California, between 76 and 85 percent of females abusing meth report physical abuse, between 33 and 58 percent report sexual assault, 28 percent admit to attempting suicide, and 35-70 percent of men report physical abuse while using meth.[19] Incarceration costs about $30,000 annually for each offender. Prison often does not address the disease that is addiction, and individuals may be likely to return to drug abuse and reoffend after being released.[20]

In the year 2000, Proposition 36 (Substance Abuse and Crime Prevention Act of 2000) was passed in California in an attempt to divert some of the prison population into substance abuse and mental health treatment programs. Before its passage, 28 percent of the California prison population were drug offenders. After Prop 36 was passed, this number dropped to 22 percent, and it is estimated to save taxpayers an average of $4 for every dollar spent on those who complete treatment.[21] In California, there are more than 200 different drug courts (family, adult, and youth) to help ensure that nonviolent drug offenders are able to get the substance abuse and mental health services they need in order to recover and go on to lead lives free from crime.[22]

Attempts to Slow Meth Production and Abuse in California

Methamphetamine manufacturing, distribution, abuse, and addiction have been prevalent in America, and particularly California, for many years. This prevalence sparked the Combat Methamphetamine Epidemic Act (CMEA) of 2005 that regulated the sale of some cold medications containing pseudoephedrine and ephedrine in order to hopefully slow the ability of illegal meth labs to produce large quantities of the drug.[23] At the time of its implementation, the law seemed to work, as rates of adult arrestees testing positive for meth dropped in 2006; however, drug smugglers and traffickers may have found ways around the laws and numbers worked their way right back up to previous rates by 2013.[24]

Drug trafficking organizations (DTOs) may resort to “smurfing” or sending people to multiple stores in one day to obtain the amount of necessary precursor drugs for meth manufacturing. Meth may also be more regularly smuggled into the country as an estimated 90 percent of meth in the US is now thought to originate outside of its borders. Meth seizures at the California/Mexico border near San Diego jumped 33 percent in 2014, reaching record high levels.[25]

Methamphetamine abuse and dependence have spread throughout the state of California at rates increasing on average about 17 percent each year from 1999 to 2008, and this growth doesn’t appear to be slowing down.[26] The spread has been likened to that of an epidemic, spreading most quickly through low-income, Hispanic, and white populations outside of the big cities.[27]

Meth can be harmful not only to individuals and families but also to entire communities. Many groups and nonprofit organizations, as well as state- and county-funded programs, exist to help prevent, treat, and promote recovery from the disease of addiction and all of its potential consequences. Public treatment programs may provide access to detox services; pharmacological management; behavioral and therapeutic services; counseling for individuals, groups, and families; transitional services; support groups; life skills training and educational programs; services for minority and specialty populations such as pregnant women, children, or the elderly; and recovery and aftercare services.

Public treatment is open to everyone. Financial status is taken into account, so any California resident who needs treatment should be able to receive it. Public substance abuse services in California are delegated to individual counties, and a directory can be found here.[28]

In order to receive public substance abuse treatment in California, usually the individual seeking treatment should first make an appointment with a primary care doctor who can then give a referral to a treatment program. Those with financial need may apply for California’s Medicaid program, called Medi-Cal, through their local county welfare office. The Drug Medi-Cal (DMC) Treatment Program may be a resource for Medi-Cal recipients needing help with meth abuse or addiction.[29] There are also 35 Syringe Exchange Program (SEP) locations within California to help prevent the sharing of dirty needles among those injecting meth.[30]

Public mental health and substance abuse programs may only serve a small population of those in need. Between 2009 and 2013, for example, only 36.5 percent Californians battling mental illness and 12.6 percent of California residents suffering from illicit drug abuse or dependence received public treatment services.[33] Private facilities may help to open up treatment options for more people and give Californians options when it comes to substance abuse and mental health care.

Private addiction and mental health treatment facilities are required to be licensed by California DHCS. Many may choose to provide care above state standards and apply for additional certification through the state. A list of local licensed, and certified, providers can be found here.[34]

Privately funded facilities may offer additional services or amenities not provided in the public sector on top of traditional programs and may not require a primary care provider’s referral. Equine-assisted therapy, wilderness therapy, family intensive programs, acupuncture, massage therapy, yoga, meditation, spa treatments, diet and nutrition planning, fitness training, and other complementary and alternative methods may be used in private addiction treatment programs. Insurance may be accepted for payment, and private programs are likely to have a professional on hand to help answer questions so individuals can find a program that will fit within the family’s budget.

Comprehensive treatment for meth addiction is likely to include medications to help manage withdrawal side effects, such as anxiety, insomnia, or depression combined with behavioral and therapeutic techniques. Co-occurring disorders, such as mental illness and addiction, may be treated by medical, substance abuse, and mental health professionals working in an integrated fashion to treat both disorders simultaneously. A highly trained professional may provide free and confidential screenings, assessments, and evaluations to help devise a treatment and recovery program that is best for each individual person.