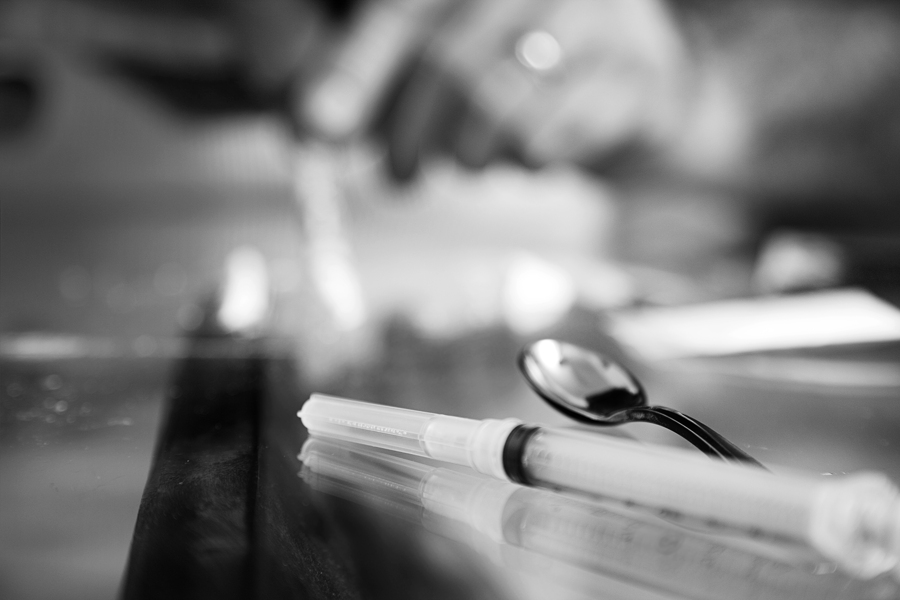 The National Institute on Drug Abuse reports that in the 2014 National Survey on Drug Use and Health (NSDUH), 1.8 percent of interviewees age 12 and older had used heroin in their lifetime. Heroin is an extremely addictive – and illegal – opioid drug that is created from components of morphine. Heroin use is sometimes preceded by prescription opioid abuse; when individuals can no longer procure such medications, they may turn to heroin to provide them with a similar high and a means of easing the cravings they may be experiencing with withdrawal. In fact, NSDUH also states that individuals who are addicted to these prescription painkillers are 40 times more likely to become addicted to heroin.

Heroin can be used in ingested in three different ways: via injection, smoking, and snorting. No matter the route, the high from heroin appears – and disappears – quickly. This, along with the fact that heroin acts on the brain’s reward center, creates the high risk of addiction. Some of the effects of a heroin “high” include:

Long-term heroin abuse is related to many long-term health problems, states the Center for Substance Abuse Research. Some of the problems that individuals may experience include:

An overdose can occur when an individual uses a large amount of heroin that the body cannot handle. In 2013, according to a publication by the United States Department of Health and Human Services, there were 43,982 deaths that were related to drug overdose. Heroin was responsible for 6,525 overdose deaths among men and 1,732 overdose deaths among women that year. If it is a possibility that an individual has overdosed on heroin, emergency services should be contacted immediately. Some potential signs of overdose listed by The New York Times Health Guide include:

NIDA reports that in 2014, the United States Food and Drug Administration approved Evzio, a prescription injection of naloxone, due to the dramatic increase in heroin overdose-related deaths. This injection, which can be used by healthcare providers and family members, works by preventing heroin from activating certain receptors in the brain, thus keeping the individual safe until emergency services arrive.

When individuals become dependent on heroin, they often have already developed a tolerance to the drug, meaning they have had to increase the amount of heroin used to achieve the same high that used to be achieved with a smaller dose. With tolerance comes an increased risk of overdose since the user may take a high enough dose to trigger overdose in the attempt to chase the initial high.

Medical detox is the first step to on the journey to recovery from heroin abuse. With medical detox, the natural withdrawal process is monitored around the clock by medical professionals. This ensures that clients in detox remain both safe and comfortable. Medications to manage specific withdrawal symptoms, such as anxiety, nausea, or depression, are sometimes prescribed.

As heroin is an opiate, maintenance medications are often used during the medical detox process to manage withdrawal symptoms and cravings. Per NIDA, methadone and buprenorphine have been shown to be effective in assisting with treatment of heroin dependence. Both of these medications bind to the same receptors in the brain that heroin binds to, but they form a weaker bond than heroin does. This can help reduce cravings in individuals who are dependent on heroin. Sometimes, medications like methadone or buprenorphine are used for months in slowly tapered dosages until the person is fully weaned off all medications.

Following the medical detox process, individuals will then participate in a treatment program that best fits their needs. For heroin addiction, inpatient treatment programs are generally recommended, where individuals can focus on recovery around the clock. In an inpatient environment, the risk of relapse is reduced since clients don’t have access to substances of abuse, and they are protected from common triggers in the outside world.

A variety of therapies are usually used in addiction treatment. Cognitive Behavioral Therapy (CBT) is one of the most widely used forms of behavioral therapies. It focuses on helping individuals identify thoughts and behaviors that are related to their heroin use, so they may change them. When CBT is used, it has been shown that clients use the skills learned well after therapy has been completed, often providing long-lasting benefits that extend beyond the set treatment period.

After individuals are released from an inpatient program, they may continue with outpatient therapy. This provides individuals with continued structure and support in recovery as they transition back to life in the real world. There may be an option to participate in family therapy as well, so individuals and their loved ones can work together to repair relationships that may have been damaged in active addiction.

Twelve-Step groups, such as Narcotics Anonymous and Heroin Anonymous, allow those in recovery to create supportive relationships with peers who are also in recovery. Many addiction treatment programs feature 12-Step meetings onsite, or provide transportation to offsite meetings, as part of their curriculum. Since these meetings become part of individuals’ lives while in structured treatment, it’s a smooth transition to continue such participation after graduating from a formal inpatient treatment program.

How likely is a relapse to occur when trying to kick heroin?

In general, NIDA reports that drug addiction has relapse rates that are similar to those of other chronic diseases, namely hypertension, type I diabetes, and asthma, at between 40 percent and 60 percent. Heroin is considered to be highly addictive as it greatly increases dopamine levels in the brain, which in turn causes an intense burst of euphoria. When dopamine levels drop after the drug wears off, low moods and drug cravings can be significant, making relapse common.

Relapse is often part of recovery, and it doesn’t signify failure; it simply necessitates a greater focus on recovery. As a result, relapse prevention is an important component of all recovery programs. Support groups, 12-Step programs, and coping tools learned in a treatment program can help to minimize and reduce instances of relapse.

How does naloxone treat overdose?

Naloxone (Narcan, Evzio) is an opioid antagonist, meaning that it has the opposite effect on opioid receptors that heroin does as an opioid agonist. An antagonist drug blocks receptors from receiving more opioids by binding to them without activating them. In this manner, naloxone kicks heroin off opioid receptors and helps to reverse a toxic overdose and restore breathing.

Naloxone is a life-saving drug that can help to reverse an opioid overdose almost immediately. It is available via a prescription, and many first responders carry the drug.

Is heroin cheaper than prescription painkillers?

Heroin may be as much as 10 times cheaper than prescription painkillers to buy on the street, CNN reports. As prescription opioid pain reliever misuse has become so widespread, many efforts have been made to stem the tide of abuse. Painkillers are formatted in tamper-resistant formulations, more tightly controlled and federally regulated, and in general have become harder to get illicitly. As a result of demand for opioids, heroin has flooded the market, and it is typically easier to get and cheaper than prescription painkillers.

What is a needle exchange program?

Needle exchange programs are usually community-based programs that help to reduce some of the negative consequences of injection drug abuse. With a needle exchange program, people who inject drugs can trade dirty needles and syringes for sterile ones. These programs provide injection materials free of charge as well as safe disposal sites for dirty drug paraphernalia.

Injecting drugs greatly increases the risk for contracting an infectious blood-borne disease, such as HIV or hepatitis. Sharing needles can transmit these diseases through the introduction of contaminated blood with clean blood. The Centers for Disease Control and Prevention (CDC) publishes that in areas where HIV rates are high, new injection drug users share syringes 40 percent of the time.

What are the safest maintenance medications?

When used in combination with therapy and counseling, maintenance medications may be helpful for sustained recovery, the Substance Abuse and Mental Health Services Administration (SAMHSA) reports. There are three FDA-approved medications for the treatment of opioid dependence: methadone, buprenorphine, and naltrexone.

Methadone (Dolophine, Diskets, Methadose) is a full opioid agonist; however, it is longer-acting than heroin and other opioid drugs, meaning that it can be given in lower, less frequent doses to keep cravings and withdrawal symptoms to a minimum. Methadone can only be dispensed through accredited opioid treatment programs (OTPs) in pill, wafer, or liquid form. Methadone still carries a risk for diversion and abuse, as it can still produce an opioid high when misused.

Buprenorphine, on the other hand, is only a partial opioid agonist that doesn’t induce the same burst of euphoria as other opioids. After a certain amount is taken, the effects max out. This plateau effect and partial activation of opioid receptors make it less desirable as a drug of abuse and therefore generally safer as a maintenance medication. Buprenorphine is available as a sublingual filmstrip, as a tablet, or in a new implant form (Probuphine) that slowly releases a controlled dose of buprenorphine over a period of six months, NIDA publishes.

Buprenorphine is often combined with naloxone, an opioid antagonist. These buprenorphine/naloxone (Suboxone, Zubsolv, Bunavail) combination medications can precipitate difficult withdrawal symptoms in the event of a relapse and help to keep people abstinent from heroin.

Naltrexone (ReVia, Depade, and injectable Vivitrol) is another opioid antagonist medication used to maintain treatment compliance and prevent relapse. Naltrexone may also reduce opioid cravings and does not have a risk of abuse, making it a safe maintenance medication.