Snorting Concerta: Is There a Safe Method? 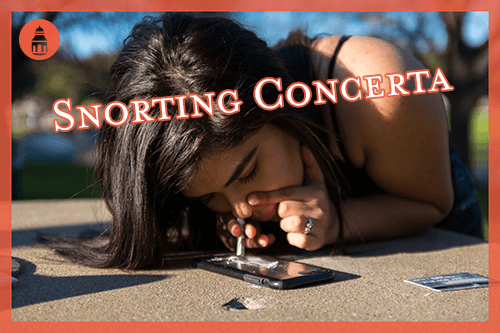 Concerta is one of the brand names for the prescription stimulant methylphenidate. Most people associate methylphenidate with Ritalin, the more famous drug used to treat attention deficit hyperactivity disorder (ADHD). Like Ritalin, Concerta is designed to treat ADHD and narcolepsy, although as a newer drug, it is formulated for extended release with the intention of making it harder to tamper with. Ritalin is notorious as a substance of abuse, as is Adderall, which is a different chemical stimulant. In response to adolescents abusing these medications as academic and sports performance enhancers, pharmaceutical companies developed newer versions of these drugs.

Even so, Concerta is becoming more widely abused as it is more widely prescribed. One of the ways people who abuse Concerta consume the drug to get an immediate, intense high is by crushing and snorting it. People who have legitimate prescriptions for Concerta have been diagnosed with ADHD, narcolepsy, or a similar condition that may benefit from off-label use of this medication.

Regardless of how the drug is acquired, crushing and snorting Concerta can be very damaging. The medication enters the bloodstream and binds to brain receptors much faster, triggers stimulation in the body faster, and may lead to overdose.

Some people who receive prescription medications have difficulty swallowing them. In these cases, their physician may allow them to crush a pill, mix it with water, and consume the medication that way. However, extended-release drugs are never considered safe to crush because the pill form of the drug has several ingredients designed to control the release of a large amount of medication over several hours, as the drug is digested. When pills are crushed, these ingredients are not effective, and much more of the drug will enter the bloodstream and travel to the brain.

In the case of a potent simulant like methylphenidate, especially in an intentionally extended-release brand name version like Concerta, crushing the drug will cause a large amount of the main stimulant ingredient to become bioavailable, which could be damaging to several parts of the body. Side effects from stimulant drugs can be harmful, especially when the drug is abused in large doses for a long time.

Some of the side effects associated with Concerta include:

Life-threatening side effects include:

Over time, consistent high blood pressure can become chronic. Combined with a faster heartbeat, this problem can lead to cardiovascular damage, higher risk of heart attack, chronic fatigue, and damage to other organs as circulation gets worse. Strokes and pulmonary embolisms become more likely with cardiovascular damage, too.

People who crush Concerta to snort it are not only misusing the medication, but abusing it specifically to get high. There is no medical reason to crush a pill and snort it. Abusing a potent stimulant like Concerta can cause addiction or overdose.

Although Ritalin and Concerta are slightly different formulas of medication, they both contain methylphenidate.

Abusing large amounts of this drug by crushing and snorting pills can cause:

Snorting Concerta Can Lead to Overdose or Addiction

Because Concerta is a newer prescription medication, some people mistakenly assume the drug is safer than illegal stimulants like meth or even safer than older ADHD medications like Ritalin. The truth is that misusing or abusing any drug, whether it is illicit or prescription, is dangerous and can lead to addiction or death, and Concerta is no different.

Crushing Concerta and either drinking it or snorting it can cause an overdose because so much stimulant enters the body at once.

Signs of a Concerta overdose include:

If these symptoms are displayed, call 911 immediately. Overdosing on any drug, including Concerta, can lead to death without medical attention.

Abusing stimulants, whether they are illicit like crystal meth or prescription like Concerta, is extremely dangerous. If drug abuse does not cause an overdose, it can lead to addiction, dependence, and tolerance. Long-term abuse can seriously harm the heart, lungs, and brain, leading to chronic health problems.