Loperamide for Opiate Withdrawal: Will It Help You?

About 2.5 million Americans struggled with opioid addiction in 2015, including addiction to both heroin and prescription painkillers, the American Society of Addiction Medicine (ASAM) reports. The steady rise of opioid abuse, addiction, and overdose in the last several years is a public health crisis.

One of the side effects of opioid addiction is physical dependence, which can occur with regular use. Opiates bind to opioid receptors in the brain altering levels of brain chemistry. When a physical dependence has formed through chronic use of an opiate, the brain can have a hard time keeping a chemical balance when the drug wears off. Withdrawal symptoms can be difficult and often resemble a really bad case of the flu.

Opiate detox often uses medications to help stabilize a person physically, and different pharmacological methods may aid in managing specific withdrawal symptoms. One of the possible side effects of opiate withdrawal is gastrointestinal upset, which can include diarrhea. 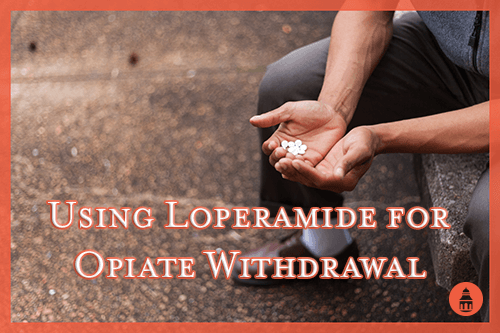 Loperamide, sold under the brand name Imodium A-D among others, is an over-the-counter (OTC) anti-diarrheal medication that may help with symptoms of opiate withdrawal during detox.

Info and Risks of Using Loperamide on Your Own

Opiate withdrawal can be difficult and should not be attempted at home. A medical detox program is considered the optimal environment for allowing these potent drugs to safely process out of the body since medical supervision and management of withdrawal are provided around the clock.

In low doses, loperamide is a relatively safe drug that helps to manage diarrhea. The journal Drug and Alcohol Dependence warns that loperamide is increasing in popularity as a drug of abuse to self-medicate opiate withdrawal, however. Loperamide may also be misused as a “bridge” between doses of other illicit drugs.

Loperamide is actually an opiate receptor agonist itself. While it doesn’t cross the blood-brain barrier and thus does not block pain like other opiates of abuse do, when taken in large amounts, loperamide may have a euphoric effect.

Possible side effects of loperamide may include:

Medical Daily reports that when taken in a dosage that is 10 times more than what is recommended, loperamide may seem to help with many of the symptoms of opiate withdrawal. When taken in extremely high doses, it can cause a person to feel high.

While loperamide does not tend to depress the central nervous system in the same way that other opioid agonists do, the anti-diarrheal medication can interfere with normal cardiac and heart functions. The Annals of Emergency Medicine warns that abuse of loperamide can lead to cardiac dysrhythmia and death. The New York Times reports that a normal dosage of loperamide is no more than four 8-mg tablets a day, people abusing the drug may take as much as 100 2-mg tablets every day for several weeks. Loperamide may then have an addictive potential of its own.

That being said, when used as part of a medical detox protocol, in safe doses, and under strict medical supervision, loperamide can be a useful medication to aid in opiate withdrawal.