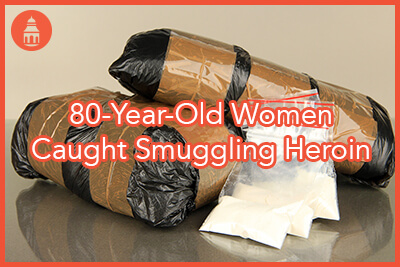 Never too old… to smuggle drugs? Two women were busted by a border patrol drug-sniffing dog when they tried to smuggle 92 pounds of heroin into the United States through the Tecate Port of Entry. One of those women was 81 years old. The estimated street value of the 34 parcels of heroin found hidden in the rocker panels of the sedan is $870K+.

It is not believed that the elderly woman is the head of drug cartel or a cartel associate of any kind, though she was arrested and transferred into the care of Homeland Security.

Says Pete Flores, the San Diego CBP Director of Field Operations: “Cartels will try and manipulate anyone to smuggle their narcotics through the ports of entry. CBP officers are aware of the many tactics used by the cartels and remain ever vigilant to stop anyone attempting to smuggle narcotics.”

From his statements, it appears that the belief is that she was told to attempt to smuggle the drugs and that whoever made that decision within the cartel thought that an elderly woman would not arouse suspicion. They were wrong, and the hope is that the elderly woman gets the support and assistance she needs.

By Any Means Necessary

It is clear that drug cartels respect nothing when it comes to making the money associated with drug sales. From the horrors committed on both sides of the border to force people into service to the cartel to the impact of illicit drug use across the country – especially when it has been laced with fentanyl – it is clear that the sole priority is money and nothing else.

In any other business, this underlying philosophy would wipe out an organization within months, but when it comes to addiction, the customer base is ill-equipped to objectively recognize that they are endangering their own lives and at the same time contributing to the rise of unscrupulous people.

Someone living in active addiction is often unable to fully grasp or care about the impact of any of their choices that are driven by cravings for drugs and alcohol. Long-term use of mind-altering substances can physically change the structure of the brain, and in turn change the way the brain functions. Over time, drug use can cause the brain to put the need to quell cravings for the drug of choice above all else, even if the individual objectively understands that what they are doing to get that drug (e.g., stealing from a loved one, breaking someone’s trust, or contributing to the harm of innocent people) is harmful. It is not until they are free from the grip of the physical addiction that they can begin to work on the issues driving the psychological dependency on their drug of choice and begin to fully wrap their minds around what is happening to them.

It can be a devastating process. Many people battle with guilt in recovery related to their choices while under the influence or in the pursuit of getting more of their drug of choice. It is not easy to understand the full scope of what occurred in active addiction and to then turn that knowledge into the incredible tool it can be. Acknowledging your part in harming yourself and others provides you with the opportunity to:

Are you doing the work necessary to understand the impact of addiction? Are you staying connected to substance abuse treatment professionals who can help you to make the most of all that recovery has to offer you?