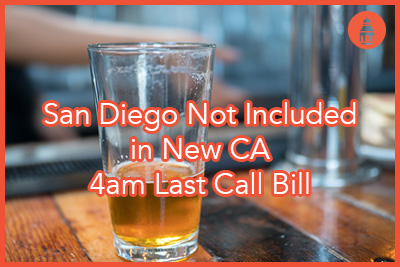 Governor Brown is currently entertaining the petition of nine California cities asking to extend the legal hours of alcohol service another two hours past the current mandatory end time of 2 a.m. to 4 a.m. San Diego is not one of the cities on the list.

While some are irritated by what they view as government control of commerce and personal choice, others are relieved that they will not have to face the issues that come with a shift in the law. If Governor Brown does sign the bill passed by state senators by the September 30 deadline, many in San Diego will be paying close attention to how things change in Sacramento, Los Angeles, Long Beach, Palm Springs, and West Hollywood among others and using that information to determine whether or not they should push for a similar bill here in San Diego.

No matter what Governor Brown decides, it will take time. If passed, the bill would not take effect until 2021 at the earliest.

Assemblywoman Lorena Gonzalez Fletcher tweeted that San Diego was not included in the bill because “no SD legislator has expressed interest” and that “extending bar hours has shown to correlate with increased drunk driving and domestic abuse”.

The debate over whether or not last call should be pushed to 4 a.m. in California has come up before. In 2013, it was proposed as a statewide resolution and a means to increase tax revenue through increased alcohol taxes, and legislators voted it down. In 2017, the idea was brought back into the spotlight by State Senator Scott Wiener of San Francisco.

Rather than pushing for a statewide change this time around, State Sen. Wiener is pushing the city’s rights angle. That is, he is proposing that individual cities should have the right to choose how they want to handle last call, suggesting that cities that are tourist destinations have a vested interest in keeping alcohol accessible as late as possible.

Wiener says that increasing access to alcohol translates into increased revenue for local businesses, which in turn boosts the local economy and increases tax revenue which has the potential to serve everyone. He points out that 15 other states across the country allow for the sale of alcohol after 2 a.m. already.

Wiener, D-San Francisco, is the bill’s author. He and its proponents argue that by extending nightlife hours, businesses and cities could benefit from extra generated revenue. At least 15 other states across the US sell alcohol past 2 a.m.

Tweeted Wiener: “The Legislature just gave final approval to our bill allowing cities to extend last call to 4 a.m. The bill now heads to the Governor. We will make the case to the Governor that cities should be able to decide for themselves what kind of nightlife makes sense.”

Why So Many Oppose

What Wiener does not address is how the increased risks associated with drunk driving and domestic violence will be addressed, the toll that a 4 a.m. last call will have on neighborhood bars, and the increased burden on law enforcement, the court system, and public areas surrounding early morning establishments.

The highest rates of drunk driving accidents occur between midnight and 3 a.m. with 66 percent of all fatal car crashes during this period caused by someone who has been drinking. It stands to reason that this statistic will shift by either lengthening the time period (e.g., from midnight to 5 a.m. or later) or by increasing the numbers of fatal crashes due to the likely increased level of intoxication of drivers on the road. This means that commute traffic will likely be impacted, especially in the Los Angeles area where commuters start early and spend longer in the car to get to work in the morning.

Gonzalez Fletcher was joined by 21 other legislators in voting against the proposal. She says that social impact far outweighs the potential for increased revenue: “I’m looking for a net positive.”

Additionally, law enforcement officers and Mothers Against Drunk Driving (MADD) are not in support of the bill.

For families already living with alcoholism and those who are actively in recovery, increased exposure to or access to alcohol and other drugs often available at bars is a serious threat. The risks of domestic violence and abuse, accidental death, death to innocent people on the road, and other issues related to ongoing substance abuse are too high as it is.

Do you think it’s worth the risk to lengthen last call hours in or near San Diego?