What Does Trump’s Declaration Mean for San Diego? 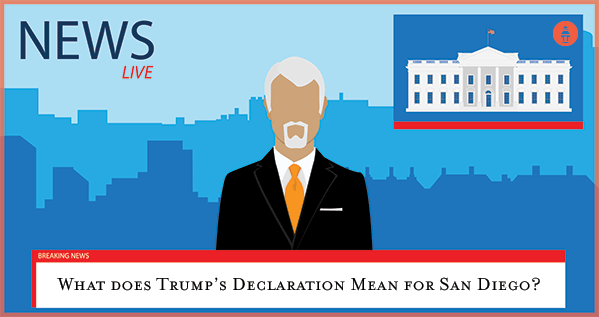 A few weeks ago, Donald Trump declared the opioid epidemic in the US a national emergency, and across the country, many celebrated. Finally, the acknowledgement and recognition that would provide the financial and legislative tools necessary to begin to fight the problem in earnest. Finally, progress would be made.

Said Trump: “This epidemic is a national health emergency. Nobody has seen anything like what is going on now. As Americans, we cannot allow this to continue. It is time to liberate our communities from this scourge of drug addiction. Never been this way. We can be the generation that ends the opioid epidemic. We can do it.”

It was a declaration that came almost three months after the Trump administration initially denied the need to declare the opioid epidemic a national emergency despite the recommendation of his own delegation assigned to investigate the problem – then flip-flopped two days later.

Unfortunately, though there may be some positive results of this national declaration of emergency, there is a lot of gray area and quite a few unknowns. When it comes to how such a declaration will impact San Diego County, here is what we do know, how it could help, and how it might hurt.

Trump did not exactly do what was recommended by the presidential delegation investigating the state of the opioid epidemic in the US. He did not declare a national emergency through the Stafford Disaster Relief and Emergency Assistance Act, a move that would have released funding immediately for the purpose of assisting those in crisis due to opiate addiction. Rather, he declared a national public health emergency, which alters some of the legislative restrictions placed on certain funding, allowing it to now be used for the purposes of treating people living with an opiate addiction.

For example, there is government funding designated solely for the purpose of the treatment and prevention of HIV/AIDS, but with this new declaration, it will be easier for organizations that have access to the funding to use some of the money to treat people who are living with HIV/AIDS and an opiate addiction.

Additionally, it is likely that there will be a removal of some of the restrictions currently applied to the treatment of opiate addiction. For example, currently, medical professionals who are certified to treat opiate addiction with the use of buprenorphine are limited in the number of patients they can take on for this purpose, and must see patients face to face – no online interactions will replace an in-person appointment. It is expected that both of those restrictions will be lifted, which will significantly increase the likelihood that people living in in rural parts of San Diego County will be able to connect with medication-assisted treatment if appropriate.

What We Don’t Know

By using the Public Health Services Act, Trump cleared the path to access a lot of grants that are currently earmarked for public healthcare and divert those funds to other areas, ostensibly under the guise of making inroads in the fight against the opiate crisis. In the speech in which he declared the national public health emergency, he tipped his hand as to how he expected those funds to be used – not necessarily on healthcare or treatment for those in crisis or support for families devastated by opiate addiction and overdose, but on the wall between Mexico and the US, and on increasing the punitive response to those who violate the current laws that criminalize addiction.

In the same speech in which he announced the declaration of national emergency, Trump said:  “An astonishing 90 percent of the heroin in America comes from south of the border – where we will be building a wall – which will greatly help in this problem.”

He further went on to support the stigma currently associated with drug addiction, which is so often a barrier to treatment, and emphasized his view that there is a criminal element to addiction: “Every person who buys illicit drugs here in America should know that they are risking their futures, their families and even their lives. Illegal drug use is not a victimless crime. There is nothing admirable, positive or socially desirable about it.”

He went on to urge for “creativity” in addressing the issue, leaving many concerned with why he did not urge for increased access to treatment, promote an increase in naloxone distribution and use, and push for the destigmatization of the disorder in order to empower families who were silently struggling to reach out for the treatment services that could help them heal.

What Does San Diego County Need?

San Diego County does not need more prisons or more prisoners. Instead, intensive treatment and support for families in addition to the person in crisis are needed now more than ever in San Diego. The hope is that the declaration will in some way help to make these things a reality.