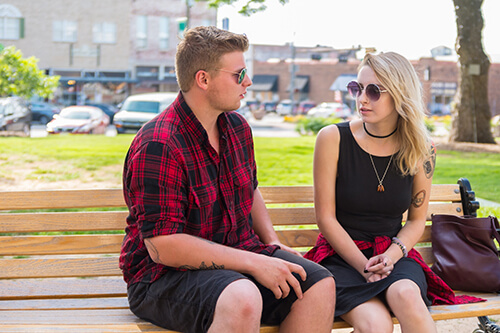 For many, the issue is black and white: When there is a clear and identifiable substance abuse disorder – an abuse problem or an addiction that is intrusive on the person’s ability to maintain a healthy and productive life – treatment is necessary. It is not even an option to consider remaining in active addiction for any longer than it takes for the person to recognize the need for treatment and get help.

There are, however, some people who view a life of addiction as a viable option. Sustained harm-reduction choices such as clean needles, decriminalization, and access to treatment, if desired, are part of this view; however, the underlying philosophy is that active addiction is not an undesirable state and that those who choose to continue living in addiction rather than actively seeking treatment should not be judged for that choice.

What do you think? Is addiction an undesirable state in all situations, or is it okay to choose to live with an addiction with no intent to ever be drug-free?

The Right to the Pursuit of Happiness

Those who are proponents of the right to live as an addict would say that their view is nonjudgmental, open-minded, and inclusive of all without placing stigma or prejudice upon anyone due to an ongoing addiction. They suggest that Americans have the right to pursue happiness as long as it doesn’t harm others. They believe that many are unable to find happiness in sobriety or live without relapse, and that these individuals should not be judged for that condition. They believe that a person’s choice to live under the influence should not be a legal issue, that drugs should be decriminalized, and that those who are living with an addiction should be given the room and support to practice harm-reduction measures and continue in addiction without judgment.

The key phrase to consider is “as long as it doesn’t harm others.” The debate lies in whether or not the behavior of using drugs brings harm to a community where the person is under the influence of the substances or the community where the drug of abuse originated. Some may view the stigma against people living with an addiction as a social justice issue that identifies the person with the addiction as a victim. But there are those who would say that though drug addiction is a social justice issue, the victims are not the people with the addiction but those who are innocent bystanders who are harmed – even killed – due to the ongoing demand for drugs.

While advocates for the right to live with addiction would say that it harms no one if someone gets high everyday and that drugs should not be illegal, the fact is that they are and that even if they were legalized, the production of these drugs wouldn’t necessarily occur in a safe and healthy manner. Consider the people who are harmed due to the drug trafficking as well as those who are impacted by ongoing drug use:

The emotional costs of addiction as well as the physical toll that addiction takes on the individual are inevitable and immeasurable. In addition, the body count and financial consequences clearly point to the fact that the choices made by one person regarding drug use and abuse are not necessarily harmless to others and potentially put the health and safety of many in our local and global neighborhoods at risk.

The Hope That Comes through Treatment

Relapse is not an indication that treatment doesn’t work or that a life in addiction is inevitable. Rather, the rates of relapse among people who are living with addiction are comparable to rates of relapse among people living with a range of chronic illnesses. Even if it feels as if it is unlikely to ever attain a balanced and drug-free life, the solution is not to settle for a life that is likely to destroy others’ lives and end in early death. There is a range of opportunities in treatment – from drug courts to outpatient care to long-term inpatient rehab to sober living. The idea that lifelong addiction is the best possible choice for anyone – even if the nature of the addiction has the person believing that – makes little sense in the face of so much opportunity for healing and change.

Drug addiction is a disorder that alters the very structure and function of the brain, driving an individual to prioritize continued drug use above all else. This is a physical as well as mental disorder and, as such, requires medical as well as therapeutic intervention and long-term support to maintain positive growth and healing in recovery. A relapse, or the desire to relapse, is normal. It’s part of the condition. But hope comes through healing and continued engagement with treatment services. Community support options provide the opportunity for anyone to keep coming back to strive for a better life in recovery.