Dangers of Snorting and Smoking Xanax

Xanax, or in its generic form alprazolam, was responsible for one-third of all adverse reactions involving the misuse or abuse of a benzodiazepine drug and resulting in an emergency department (ED) visit in 2011, the Drug Abuse Warning Network (DAWN) publishes. Specifically, more than 120,000 people sought ED treatment for a negative reaction to abusing alprazolam in 2011.

Benzodiazepine drugs, often called benzos for short, are sedatives and hypnotics with anxiolytic effects. Xanax is prescribed to reduce anxiety and to help treat both panic and anxiety disorders.

From 2005 to 2013, Xanax has been the most commonly prescribed psychiatric medication in the United States, Psych Central reports. 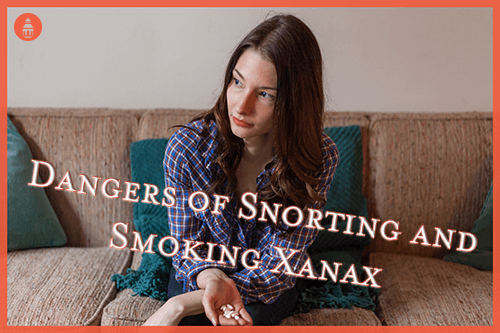 Xanax is also a popular drug of abuse. It is commonly abused orally, or the drug is altered to be injected, snorted, or smoked. The Drug Enforcement Administration (DEA) lists alprazolam as one of the top prescription drugs being diverted from the licit drug market into the illicit drug trade. The DEA further reports that young adults and adolescents may regularly crush the tablet or pill form to then snort the drug to produce a “high.”

Snorting Xanax may cause damage to the sinus cavities and to the mucus membranes in the nose. Nosebleeds, a damaged sense of smell, and irritation of the skin around the nose may be common side effects of snorting drugs. Smoking drugs can create respiratory issues, including lung infections or an increased risk of contracting pneumonia or tuberculosis.

Xanax is not smoked as often perhaps because it may not produce the same “high” this way, and the fillers used in the prescription medication may actually make a person sick. Some of the biggest risks for smoking or snorting Xanax are the heightened risk for overdose and the higher potential manifestation of addiction.

Overdose Dangers from Snorting and Smoking

A Xanax overdose may be indicated by:

Benzodiazepine drugs are central nervous system depressants, meaning that they slow down body temperature, blood pressure, and heart rate while also serving to reduce anxiety, and promote sleep and relaxation. When these drugs are snorted or smoked instead of swallowed, they are not digested the way they were intended to be, and all potential side effects are compounded. Xanax is meant to be swallowed and broken down by the gastrointestinal system, and snorting and/or smoking it sends it instead straight across the barrier between the brain and blood, and right into the bloodstream for quicker effect. Xanax can then build up quickly in the body and have a toxic effect, causing an overdose.

Overdose is considered a medical emergency, as it can be fatal. In 2013, around 30 percent of all drug overdose deaths in the United States involved a benzodiazepine, CNN reports. The American Journal of Public Health (AJPH) published that between 1996 and 2013, benzodiazepine overdose deaths increased significantly year to year.

Xanax may be especially dangerous when mixed with other substances, especially other central nervous system depressants like alcohol or opioid drugs.

Increased Rate of Dependence and Addiction

Once a dependence forms, powerful and even potentially life-threatening withdrawal symptoms may occur if the drug is suddenly removed from the body.

Xanax is considered to be a short-acting benzodiazepine, only staying in the system for about four hours, per the labeling information provided by the US Food and Drug Administration (FDA). This may make it more likely for individuals using it recreationally, like those who snort or smoke it, to take more doses more often to keep feeling its effects. A tolerance to Xanax can set in rather quickly, which is partly why the drug is only meant to be prescribed for the short-term relief of anxiety or panic symptoms and not to be used for longer than a few weeks or months. The FDA reports that using Xanax in high doses (more than 4 mg/day), and for a period lasting longer than three months, can cause a person to become dependent on the drug.

Since Xanax works by suppressing some of the functions of the central nervous system, these functions may rebound when it is removed suddenly after a dependence is established, causing an increase in body temperature, heart rate, and blood pressure. Anxiety, insomnia, trouble feeling pleasure, hypertension, tachycardia, fever, and seizures may be the result of benzodiazepine withdrawal.

Snorting and/or smoking Xanax may speed up the timeline for a person’s dependence on the drug to form, which in turn may make it more likely for the person to suffer from compulsive drug-seeking and using behaviors.

The inability to stop using Xanax, or control use of the drug, defines addiction. It is also characterized by behavioral changes related to difficulties with relationships, a loss of work or school production, and changes in socialization patterns related to drug abuse.