Snorting Trazodone: Can You Do It Safely? 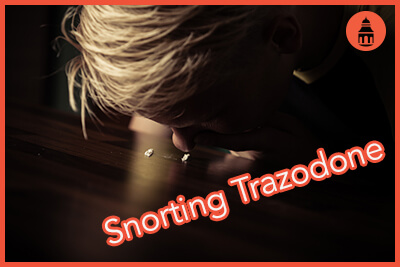 The brand names Desyrel and Oleptro contain trazodone, a drug that works as a serotonin antagonist and serotonin reuptake inhibitor. This means that its actions are designed to increase the amount of serotonin in the brain and spinal cord. The drug was developed as an antidepressant drug, designed to treat clinical manifestations of depression, but it is more often used for its ability to produce sedation and reduce anxiety.

Even though trazodone and other antidepressant drugs are not significant drugs of abuse, it is important to note that any drug can be abused by individuals who are attempting to experiment with drugs. A 2014 review in the journal Substance Abuse and Rehabilitation found that most of the reports of antidepressant abuse in the research literature were case studies, indicating that these drugs are not significant drugs of abuse that are abused by large numbers of people. The review also found no reports of abuse of trazodone products.

According to the review in the above study, most of the individuals who abuse antidepressants have co-occurring mood disorders like major depression or a co-occurring substance use disorder, such as alcohol abuse, narcotic pain medication abuse, etc.

There is some older research that mentioned some case studies where the abuse of trazodone occurred. A 1994 research study reported what is likely the first documented case of abuse of Prozac and trazodone together. A 1999 study compared three medications, Ambien, Halcion, and trazodone, for their abuse potential. Ambien and Halcion are sedative drugs that are commonly used to produce sleep and have different mechanisms of action than trazodone. The findings of the study indicated that trazodone was significantly less likely to be abused than the other drugs, signifying that while there may be some potential for abuse for trazodone, this potential is significantly lower than other drugs used to produce sleep.

Side Effects of Trazodone

Very rare side effects can occur for people who use or abuse trazodone. If these occur, the person should immediately contact their physician. They include:

Individuals who snort trazodone are not taking it according to its prescribed purposes. Snorting trazodone can also lead to problems with the nasal passages, including issues with extremely stuffy nose, runny nose, bleeding, and even a perforated septum, which can be dangerous if it becomes infected. Chronically snorting the drug may also result in respiratory problems that can lead to chronic health issues. 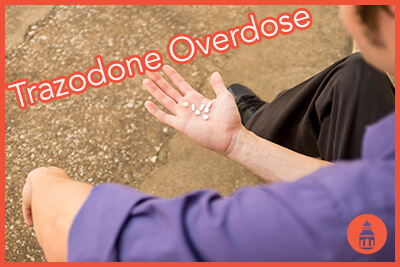 Typically, when antidepressant drugs are abused, they are taken with other drugs like alcohol. However, snorting trazodone could lead to a potential overdose of the drug. Overdoses on antidepressant drugs are rare, except in cases where someone attempts to use too much of the drug to deal with severe emotional distress or in individuals who take multiple drugs in an attempt to commit suicide. An overdose of trazodone could lead to several different life-threatening groups of symptoms.

There is no antidote for an overdose on trazodone; instead the treatment would be specific to the symptoms displayed. An individual who is suffering severe respiratory depression might be intubated; someone with severe gastrointestinal problems might receive treatment for that; individuals who are severely sedated might be given a mild stimulant; and in most cases, IV fluids would be administered.

The effects of abusing trazodone with other drugs could be potentially more serious. Individuals who are abusing trazodone with other central nervous system depressant drugs like alcohol may increase their risk of experiencing respiratory depression, seizures, potential comatose states, etc. If someone suspects that someone has overdosed on trazodone, they should call emergency medical services immediately (911).