Tianeptine is an atypical antidepressant medication, sometimes classified as a tricyclic antidepressant, although it acts on different receptors in the brain to alleviate depression and anxiety. The medication is sometimes also prescribed to treat asthma and irritable bowel syndrome. The drug may help these conditions on an off-label basis because tianeptine releases neurotransmitters by binding to some, but not all, opioid receptors. It also appears to enhance the absorption of serotonin while allowing dopamine to remain available in the brain; this means it can improve mood but will also trigger the brain’s reward system, leading to a higher abuse potential and some instances of addiction and overdose.

This antidepressant is prescribed in Europe and some Latin American countries, where it is closely regulated; it has not been approved for prescription use in the United States. A 2009 research study failed to lead to approval, and the drug’s US patent was lost in 2012. Because it is not regulated in the US, and it is increasingly available for purchase online, tianeptine abuse in the US could rise in the next few years. 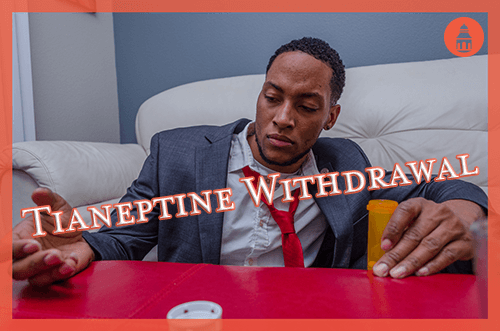 While therapeutic doses, between 25 mg and 30 mg, have little abuse risk and do not cause intoxication or euphoria, abusing much larger doses of tianeptine has been associated with addiction symptoms, including withdrawal. People who abuse tianeptine without a prescription or misuse it by taking larger doses than prescribed seek the effects produced by 100 mg or more.

Since tianeptine works on some opioid receptors, quitting this drug may induce some symptoms that are similar to withdrawal symptoms from opioid drugs.

These symptoms may include:

All antidepressants can cause withdrawal symptoms that are, in some ways, like those of opioids.

Most antidepressants take a long time to become bioavailable, so the withdrawal symptoms do not appear suddenly; instead, they begin slowly, so a psychiatrist or physician will work with their patient to taper the medication. Tianeptine rapidly metabolizes out of the body through the kidneys; this means it is important to take exactly the dose prescribed at the same time every day. 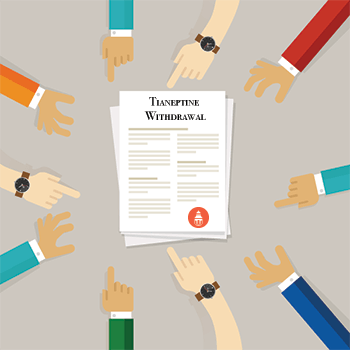 A 2009 study investigating the addictive potential of tianeptine in a small group of 24 participants found that withdrawal symptoms could be intense. Anxiety and physical excitation were the main effects of withdrawing from the drug. The small group had taken tianeptine for five months on average, but they also were all former opioid abusers, which may have led them to abuse tianeptine because it binds to some of the same receptors. Many of those involved in the study also abused antihistamines along with tianeptine. Polydrug abuse is more common among those who abuse tianeptine than among those who abuse opioids, probably because mixing drugs can enhance the euphoric effects from one or both substances.

A later case study of one woman admitted to the emergency room for tianeptine withdrawal found that there was a potential for psychotic symptoms during the withdrawal process. Two days prior to her admission, the woman reported feeling ill, fatigued, and nauseated; when she was admitted, she was agitated, lashing out physically, and suffering from paranoid delusions. Giving her benzodiazepines to reduce her anxiety did not help the symptoms, which got worse until she was sedated further. Once the psychosis resolved, the rest of her withdrawal symptoms reportedly cleared up by day five of the withdrawal process.

As with opioid withdrawal, the discomfort associated with tianeptine withdrawal may lead to relapse very quickly. People who abuse opioids typically do not experience life-threatening symptoms when they withdraw, but the psychological and physical discomfort can lead to a rapid return to abusing the drugs, which can cause overdose. Similarly, tianeptine can lead respiratory depression, the main cause of harm from overdosing on opioids, so relapsing into tianeptine abuse may lead to overdose death.

After a week, both opioid and tianeptine withdrawal should clear up; however, in both instances, people who abuse large doses of these drugs or abuse them for a long time may experience longer-lasting withdrawal symptoms. It is possible to develop post-acute withdrawal symptoms (PAWS), too, which can last for weeks or months. PAWS typically involves psychological symptoms like mood swings and cravings. Brain chemistry changes due to chronic drug abuse mean that the brain has a harder time producing neurotransmitters without the presence of the drug, and tianeptine may cause these changes in brain chemistry that could trigger PAWS.

These symptoms are also associated with underlying mood disorders, so they could be either PAWS or rebound symptoms of depression, anxiety, or sleep disorders that tianeptine was designed to treat.

Recovering from Tianeptine Abuse Is Possible with Evidence-Based Treatment

Therapeutic doses of tianeptine are safe for most people, but some individuals are at risk of abusing the drug and ramping up their dose quickly to get high or feel normal. Some people struggling with tianeptine abuse report taking as much as 1 gram per day, well above the starting dose of 25 mg. Since withdrawal symptoms can be as uncomfortable as opioid withdrawal, it will be hard to overcome abuse of this drug without medical supervision.

There is no legitimate medical use for tianeptine in the US, and it is rarely abused in this country; however, with the rise of nootropics’ popularity, many people may begin abusing tianeptine by purchasing it online where it is marketed as a dietary supplement and cognitive enhancer. Self-dosing without medical supervision is never recommended for any pharmaceutical drug, so taking tianeptine in the US can be extremely dangerous.

While there is little tianeptine abuse in the US currently, addiction specialists can still ease the detox process. If tianeptine functions like opioids at high doses, a drug like buprenorphine may be useful to ease the body off dependence and reduce withdrawal symptoms. A medical professional will evaluate the severity of withdrawal symptoms before prescribing any medications during drug detox, but once they have determined that their patient needs medication-assisted treatment (MAT), they will create a tapering plan to ease the person off the substance of abuse. Once the person has safely detoxed, with medical supervision, they should be referred to a rehabilitation program, which will provide evidence-based group and individual therapy to change compulsive behaviors around drugs like tianeptine.

This process has worked well for people in the US who struggle with opioid addiction, so it can work for those struggling with tianeptine, too. Contact an addiction specialist as soon as possible to get help from medically supervised detox and evidence-based therapy in an appropriate rehabilitation program.