Tianeptine: Risk of Addiction and Abuse

Depression is a mental health condition that affects over 350 million people around the world. With so many people struggling with this disorder, it is important to have effective medical treatments that can partner with behavioral therapy. Several types of antidepressant medications are prescribed to treat the condition, including MAO inhibitors, tricyclic antidepressants, and selective serotonin reuptake inhibitors (SSRIs). However, only a small percentage of people taking tricycling antidepressants, SSRIs, and other kinds of antidepressants achieve remission of depression symptoms, so it’s important that a variety of prescription approaches to treatment are available. 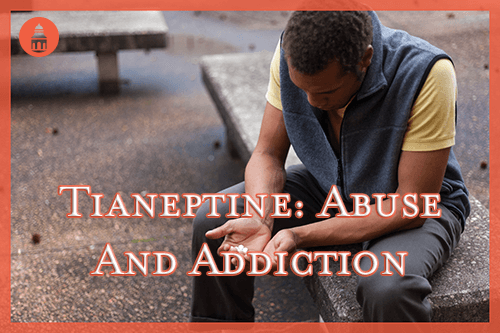 Tianeptine was first synthesized by French researchers in 1981. This antidepressant is still widely available in Europe, but because the US patent expired, it is not prescribed in North America. The US and Belgium both began clinical research into the effectiveness of tianeptine in 2009 but abandoned research into the drug treatment in 2012.

Instead, psychiatrists in the United States typically prescribe SSRI medications to treat depression, with older classes of antidepressants like tricyclics and MAO inhibitors following if SSRIs do not work. However, because of rapidly growing illicit drug sales online, tianeptine can be purchased through various websites. It is not specifically scheduled under US drug law, which makes tianeptine a potential substance of abuse.

Early research into tianeptine as an antidepressant suggested that this drug could be more effective than other classes of antidepressants, especially tricyclic drugs.

Tianeptine was investigated as a potential treatment for:

Tianeptine appeared to have similar low-risk side effects as SSRIs, so it was not likely to cause:

Because of how the body processes tianeptine through the gut and liver, it has high bioavailability with a short half-life, so it is quickly eliminated. This means the effects on the brain occur sooner; previous antidepressants took several weeks to become effective. Because the body quickly eliminates the drug, people taking prescription tianeptine must stick to their scheduled doses, so a consistent level of the medication remains active in the body.

Unlike other antidepressants, tianeptine appears to work as a selective serotonin reuptake enhancer rather than an inhibitor. Breakthrough research in 2014 found that the drug works on some opioid receptors, though not the ones associated with intoxication. The action helps to improve mood by stimulating the release of neurotransmitters, which also soothes anxiety.

Tianeptine also increases how much serotonin the brain absorbs. Other classes of antidepressants block serotonin receptors from absorbing this important neurotransmitter, but absorbing it rapidly appears to have a depression-lifting effect, too.

Still, the 2014 study suggested that tianeptine’s effects on some opioid receptors may lead to intoxication if a large enough dose of the drug is abused.

The Potential to Abuse Tianeptine

Tianeptine abuse is still rare even in countries like France that prescribe the medication. People who abuse multiple substances are more likely to also abuse tianeptine. Large enough doses of tianeptine can cause a high, though the drug appears to be abused mainly for its calming, anti-anxiety effects. It can be very hard to quit, leading to frequent relapses.

Taken in doses over 100 mg, tianeptine can cause euphoria similar to that caused by opioid drugs, including Vicodin, OxyContin, or heroin. The typical therapeutic dose, as prescribed in other countries, ranges from 25 mg to 30 mg, which allegedly does not produce any euphoric effect.

A 2009 study observed a small group of 24 volunteers who had abused opiate drugs in the past and who abused tianeptine at the time of the study. The overlap may involve compulsive behaviors involving pharmaceutical drugs like prescription painkillers. Being prescribed tianeptine may have triggered the behavioral problem while attempting to address a mood disorder.

However, since tianeptine also triggers some opioid receptors in the brain, this group could have preferred tianeptine as a drug of abuse because of similar short-term effects as opioid drugs.

Another potential cause of tianeptine abuse may involve the reabsorption of serotonin while other mood-elevating neurotransmitters, like dopamine, remain available in the brain. The presence of dopamine may trigger the reward system, leading to elevated mood, which may become addictive. Other addictive substances trigger the release of dopamine, too, so there may be a similar pattern with tianeptine.

Increasingly, tianeptine is being abused as a nootropic, or a drug that enhances cognition, memory, or learning. Because of how the drug binds to receptors in the brain, it can cause muscle relaxation, relieve anxiety, and elevate mood. This combination may make the person feel as though they can think better because they are not worried, in pain, or depressed.

A 2011 French assessment of tianeptine abuse indicated that some people do misuse or abuse the medication, leading to doctor-shopping behaviors to get multiple prescriptions. The investigation found that, among French prescriptions, tianeptine was the most abused antidepressant, with benzodiazepines being the only other psychiatric medications that were abused at higher rates, using doctor-shopping indicators (DSIs).

A 2011 French assessment of tianeptine abuse indicated that some people do misuse or abuse the medication.

A more recent study involved tianeptine’s effects on mice to understand how this drug could affect the human brain. The study discovered that this antidepressant can produce some opiate-like effects – specifically, analgesia and stimulation of the brain’s reward system. These side effects may, for some people, trigger drug-seeking compulsive behaviors associated with addiction. However, there were no signs of tolerance to the medication, meaning that the mice did not seek larger doses of the drug over time; tianeptine also did not produce withdrawal symptoms. This makes tianeptine unlike other antidepressants, which must be tapered if one has taken them for a long time.

Women who take large doses of tianeptine during pregnancy can cause neonatal abstinence syndrome in their infants. Medical research has not conclusively found the cause of this, but it may relate to tianeptine’s activation of opioid receptors.

While earlier studies reported no withdrawal symptoms from suddenly quitting tianeptine, later studies suggest that rebound symptoms of underlying depression and anxiety could be part of the withdrawal experience, which may trigger cravings for the drug, leading to cycles of abuse.

Signs of tianeptine withdrawal may include:

People who abuse tianeptine and attempt to quit without the help of a doctor or therapist may experience these withdrawal symptoms and feel like they need tianeptine to feel normal. This can cause a relapse back into abuse of the drug.

One case report of severe tianeptine withdrawal suggests that these symptoms may occur if one abuses a lot of tianeptine, then tries to quit suddenly:

These indicate withdrawal psychosis, which should be rare with tianeptine but is a potential risk. The drug may also have gastrointestinal side effects, like diarrhea, which are similar to withdrawal symptoms associated with opioids.

Overdose on Tianeptine Is Rare but Possible

Tianeptine is not widely associated with overdose, but because the drug acts on some opioid receptors, there are some case reports of respiratory depression associated with too much tianeptine. Slowed, irregular, shallow, and stopped breathing are all usually associated with opioid abuse and overdose; this effect can lead to death if it is not treated by emergency medical professionals. Tianeptine overdose is also associated with cardiovascular damage, so changes to heart rate can lead to a heart attack or death.

In one case report, an individual suffering a tianeptine overdose was given naloxone in the ER. Naloxone is a drug most often associated with temporarily stopping opioid overdoses, but the drug appeared to work for this instance of tianeptine overdose, too.

Since purchasing drugs over the Internet is getting easier and easier, there may be a rise in tianeptine abuse in the US soon. Any form of prescription drug abuse requires treatment. Addiction specialists can help with the detox process, which may involve using a drug like buprenorphine to taper off high doses of tianeptine, opioids, and similar drugs.