Rehab for an Addiction to Prescription Opiates 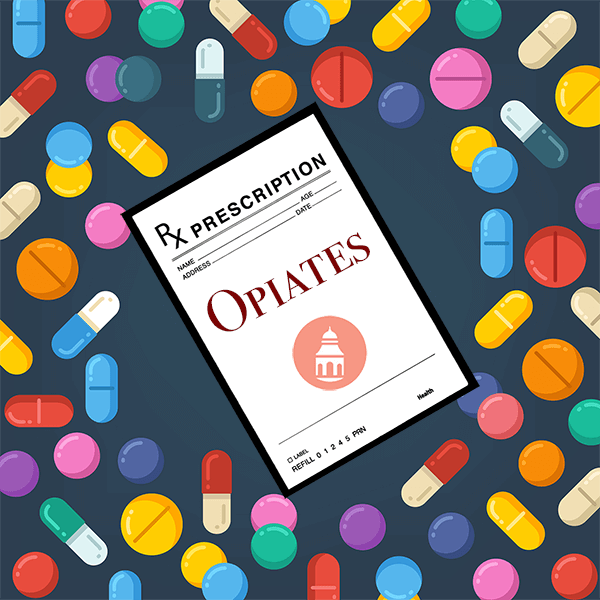 Opiate drugs of all kinds are contributing to what is being called a drug abuse and overdose epidemic across the country. However, it’s not just illicit drugs like heroin that are to blame. In fact, increases in abuse rates for prescription painkillers are a major element of the epidemic.

Treatment for opiate abuse and addiction is available and can help in the struggle against this epidemic. Understanding prescription opiates, their use and abuse, and how to find assistance to deal with a prescription opiate addiction can help individuals learn to manage this dangerous and even life-threatening mental health issue.

Opiates are drugs that are made using sap from the seed head of the opium poppy. This substance is psychoactive, and it works as a central nervous system depressant. As described by Biology Reference, these drugs, also known as narcotics, can ease pain, which is their chief medical use.

This effect makes them helpful for:

In addition, these medications can provide other treatment benefits as described by News-Medical, such as cough suppression, diarrhea treatment, and treatment of alcohol withdrawal.

There are several types of opiate and opioid medications that are used for different purposes, as listed and described by WebMD:

Several of the brands within these types, such as Percocet and Vicodin, are combined with acetaminophen to provide even more broad-spectrum pain relief.

The challenge of using opiates medically is that they are highly addictive drugs. First of all, opiates are known to promote a feeling of euphoria, which is why illicit forms of the substance, such as heroin and opium, have often been abused. However, addiction can develop to prescription versions of opiates as well.

This often occurs when a person uses the drug for a long time, which can result in disruption of the brain’s natural chemical processes. When this happens, several changes in the brain can occur that lead the person to develop the mental health disorder commonly referred to, in its most severe form, as addiction. Generally, this is also referred to as a substance use disorder.

The process of addiction to a prescription opiate most often begins with the person developing tolerance to the medication, as defined by the National Institute on Drug Abuse. This causes the individual to feel as if the drug is not working as well as it used to. Some people respond to tolerance by misusing the prescription, increasing the dose or frequency of use to get the same effect they were feeling prior to tolerance.

The problem with this is that the person then develops tolerance to the higher dose, leading to a cycle of increasing dosage and tolerance. After a while, this can lead to the person becoming dependent on using the drug to not feel pain. In addition, because of the medication’s euphoric effects, the drug may also have become necessary for the person to feel happy or normal.

With the combination of tolerance and dependence, the individual can then develop an inability to stop or control opiate use, which indicates the person is experiencing a prescription opiate use disorder.

The National Survey on Drug Use and Health reports that nearly 97.5 million people used prescription narcotics for one reason or other in 2015. Of these, nearly 12.5 million misused the medications.

The most commonly prescribed and abused opiates include: 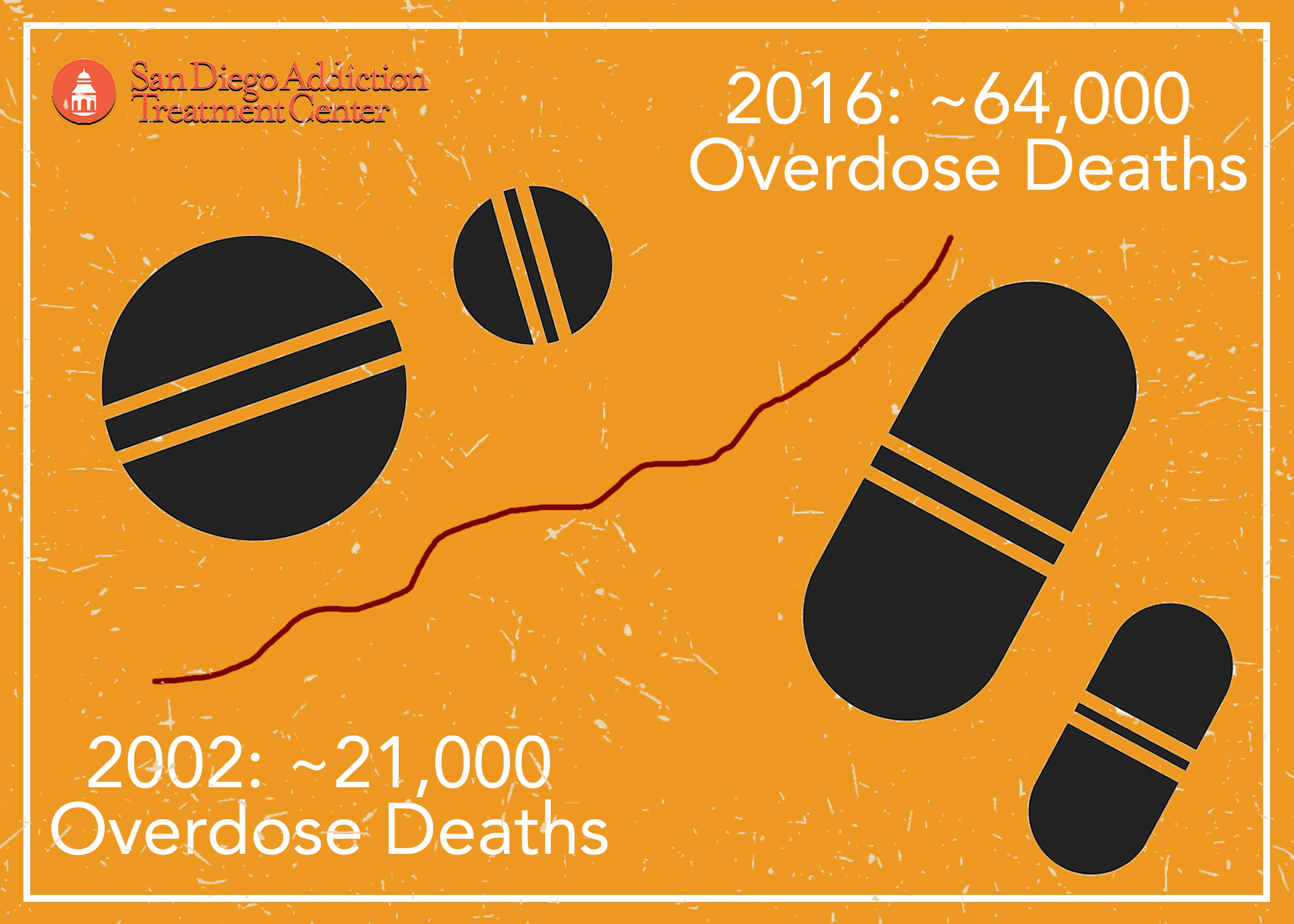 Abuse of a wide variety of prescription drugs, including opiates, has been on the rise over the last several years, to the point that people are experiencing high levels of overdose and other adverse effects caused by the substance abuse. These facts and the challenges they cause for individuals, families, and communities have led the Centers for Disease Control and Prevention to declare that the US is in the middle of a prescription drug abuse epidemic.

According to the National Institute on Drug Abuse, fatal overdoses resulting from prescription opiate abuse doubled between 2002 and 2011, and stayed basically level from 2011 through 2015. However, prescription opiate abuse can often lead to abuse of illicit opiates like heroin, and overdose deaths resulting from all types of opiates combined have continued to increase, particularly between 2012 and 2015.

Deaths are not the only result of the prescription drug abuse epidemic. Abuse of prescription opiates can lead to other negative effects on the person’s health, both in the short-term and long-term.

Short-Term and Long-Term Effects of Abuse

Overdose is a well-known potential effect of opiate abuse. However, misusing or abusing the drug can lead to other health issues – both mental and physical – that can upset a person’s quality of life and cause damage to relationships. It can even cause severe health problems that will last the rest of the person’s life.

In the short-term, opiate abuse affects the dopamine pathway in the brain.

Opiates bind to receptors normally involved in the body’s pleasure and reward system, and enhance the dopamine reaction, resulting in euphoria and a host of other mental and physical responses that, as described by the National Institute on Drug Abuse, include:

In the long-term, this opiate abuse can disrupt the dopamine system in the brain and even lead to damage to that system.

Severe long-term effects can include:

Without treatment, these long-term effects can induce lasting damage to a person’s livelihood, relationships, and health.

Treatment for Opiate Abuse or Addiction

There are treatments that can help to manage opiate abuse or addiction. One type of treatment that is very well-known involves using less potent types of opiates, such as methadone or buprenorphine, to help people wean off the more potent opiate and move forward into recovery. For people with long-term, high-risk abuse or addiction problems, these treatments are sometimes even continued indefinitely to help the individual avoid relapsing to use of a more dangerous drug.

The challenge with this type of treatment is that it maintains the person’s substance use disorder rather than providing methods to help the person recover from the addiction. More robust, research-based rehab programs can provide these therapies that enable individuals to manage their addictions rather than feed them.

These therapies, among others, have been shown through research to result in a higher likelihood of recovery.

What to Look for in a Rehab Program

Treatment for opiate abuse or addiction can be found in a lot of places. However, for the best chance of recovery, programs that provide the above therapies and treatments – and that assess the individual to determine a personalized, comprehensive recovery program – are most able to provide the treatments each person needs.

When seeking a rehab program, it can help to ask the following questions:

If the answers to all these questions are “yes,” the treatment program is more likely to help clients achieve recovery and stay away from prescription opiate abuse in the future.