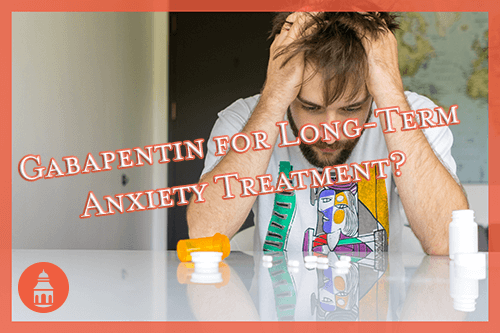 Gabapentin is a prescription drug that was approved by the Food and Drug Administration (FDA) in 1993 to prevent partial seizures related to epilepsy. Currently, the drug is also prescribed to treat postherpetic neuropathy, or pain or numb feelings in the hands and feet due specifically to shingles, after being approved for this use in 2004. It is also sometimes used in hospital settings or before surgery as an analgesic.

Since gabapentin mimics the effects of gamma-aminobutyric acid (GABA), a neurotransmitter associated with slowing communication between neurons, the drug has long been prescribed off-label for numerous treatments, including use as an anti-anxiety medication. Gabapentin’s effects are somewhat similar to those of benzodiazepines like Klonopin, Xanax, and Valium because it reduces rapid firing between neurons to create a sense of calm. However, benzodiazepines act on the brain by binding to GABA receptors, which gabapentin does not do. For some people, this may mean gabapentin is more effective for treating anxiety without triggering abuse or addiction.

Some surveys suggest that up to 90 percent of gabapentin prescriptions are for off-label applications, including the treatment of anxiety disorders. Since 1999, research suggests that the drug is both effective and ineffective in treating this mental condition. The medication’s effectiveness depends on several factors.

Gabapentin Shown to Be Effective in Several Studies

Several studies between 1999 and 2013 suggest that gabapentin is very effective as a treatment for anxiety in specific circumstances.

Doses used to treat anxiety in these studies ranged from 300 mg (a very low dose) to 3600 mg; the average dose was 600-1200 mg. A prescribing physician will work to find the lowest possible effective dose, but that can vary depending on age, gender, body mass, and some other factors.

Downsides to Using Gabapentin as an Anxiety Treatment

Although the drug may be a good approach for short-term treatment of anxiety, taking it for longer than a few weeks may not be appropriate for most people. Gabapentin has some side effects that can become long-term health problems.

Some side effects that can become serious include:

Additionally, gabapentin is only approved to treat nerve issues and seizures. Taking this medication for several weeks to treat anxiety can lead to withdrawal symptoms that mimic other, more serious conditions, including seizures, insomnia, panic attacks, and nerve pain.

People who struggle with anxiety disorders are also at greater risk for developing problems with substance abuse. While this is mostly associated with alcohol use disorder, many of those with anxiety misuse and abuse prescription anti-anxiety medications like benzodiazepines. There is little information on abuse of gabapentin among people with anxiety, but it is a risk that must be considered, as gabapentin becomes a more widely abused drug.