What Are the Key Differences between Naltrexone and Naloxone?

Because the two drugs have similar names, naltrexone and naloxone are commonly confused. Both of these medications are opiate antagonist drugs, meaning that they prevent or block opiate drugs from reaching the brain at a cellular level.

Opiate drugs include numerous prescription medications that are primarily used to control moderate to severe pain as well as several illicit drugs. All opiate drugs are either processed from the opium in the Asian poppy plant or synthetically produced chemical substances that are similar to substances found in opium. This is a large class of drugs and consists of prescription medications like morphine, Vicodin (acetaminophen and hydrocodone), OxyContin (oxycodone), codeine, etc., as well as illicit drugs like heroin.

The information in this article comes from the books Lippincott’s Illustrated Review: Pharmacology, Neuropathology of Drug Addictions and Substance Misuse Volume 1 and Principles of Addiction Medicine as well as from the websites of the Substance Abuse and Mental Health Services Administration and the National Institute on Drug Abuse.

Uses of Naloxone and Naltrexone

Naloxone, also known by the brand name Narcon, is a fast-acting drug that acts almost immediately and quickly occupies the sites in the brain that are occupied by opiate drugs, knocking these drugs off those sites and reversing the effects of opiate drugs. Naltrexone is also a drug with a strong ability to affect the neurons in the brain and spinal cord and block the actions of opiate drugs. Common brand names for naltrexone include ReVia and Depade. Drugs containing naltrexone are designed to be long-term opiate drug blockers, and the effects of these drugs typically take between one or two hours to be realized.

Naloxone is most often used as a short-term opiate blocker, even though it is similar to naltrexone in its chemical structure. It is not designed to be used for long-term treatment of the abuse of opiate drugs; instead, it is more often used as an emergency treatment for people who overdose on opiate drugs.

Naloxone acts quickly, immediately knocking opiate drugs off the receptors in the brain and reversing the effects of opiate overdose, particularly serious issues with decreased heart rate and breathing rate. Once naloxone is administered to an individual who has overdosed, the person begins to breathe regularly, and their system normalizes. Use of this drug can prevent brain damage as a result of an overdose on opiate drugs such as heroin and even powerful opiate drugs like fentanyl, which are extremely dangerous. The faster the drug can be administered, the better the chance that it can save the person’s life, as the effects typically occur within five minutes of administration. Naloxone can be administered via an injection or nasal spray.

Naloxone is also used in opiate replacement medications like Suboxone, which contains both naloxone and buprenorphine. In this capacity, it functions as a protective factor against abuse of the drug. Opiate replacement medications are designed to control the withdrawal syndrome that occurs in the early stages of recovery from abuse of opiate drugs. Buprenorphine is an opiate medication that is not as strong as other opiate drugs, but it can be used to control withdrawal from opiate drugs.

If an individual who is in recovery from an opiate use disorder (opiate abuse or addiction to opiates) attempts to grind up Suboxone pills and snort or mix them with water and inject them (a common way that addicts attempt to abuse opiate replacement medications), the naloxone is activated, and the person cannot get effects from the buprenorphine. The person would also immediately go through it opiate withdrawal syndrome, discouraging them from trying to abuse Suboxone further. If the person does not attempt to grind up Suboxone, the naloxone in the drug is not activated.

Naltrexone is used differently than naloxone. It is a slower-acting drug. Naltrexone is more often used for people who are recovering from opiate abuse or alcohol abuse. It is most effective after the person has been abstinent from alcohol or drugs for a week to two weeks. Its effectiveness is designed to prevent relapse by attaching to the opiate receptors in the brain and preventing cravings for these drugs. It is not effective at controlling withdrawal symptoms. It does not produce a “high” (neither does naloxone), and the use of naltrexone also reduces the high from drugs and alcohol if they are taken.

Research studies have indicated that naltrexone is effective in reducing the amount of alcohol a person in recovery drinks if they decide to start drinking again while on the drug. However, naltrexone is not effective if the person in recovery does not become involved in a recovery program that includes therapy, participation in peer support groups like 12-Step groups (e.g., Alcoholics Anonymous or Narcotics Anonymous), and receives other forms of treatment for their substance abuse issue. It is not designed to be used without these forms of support. 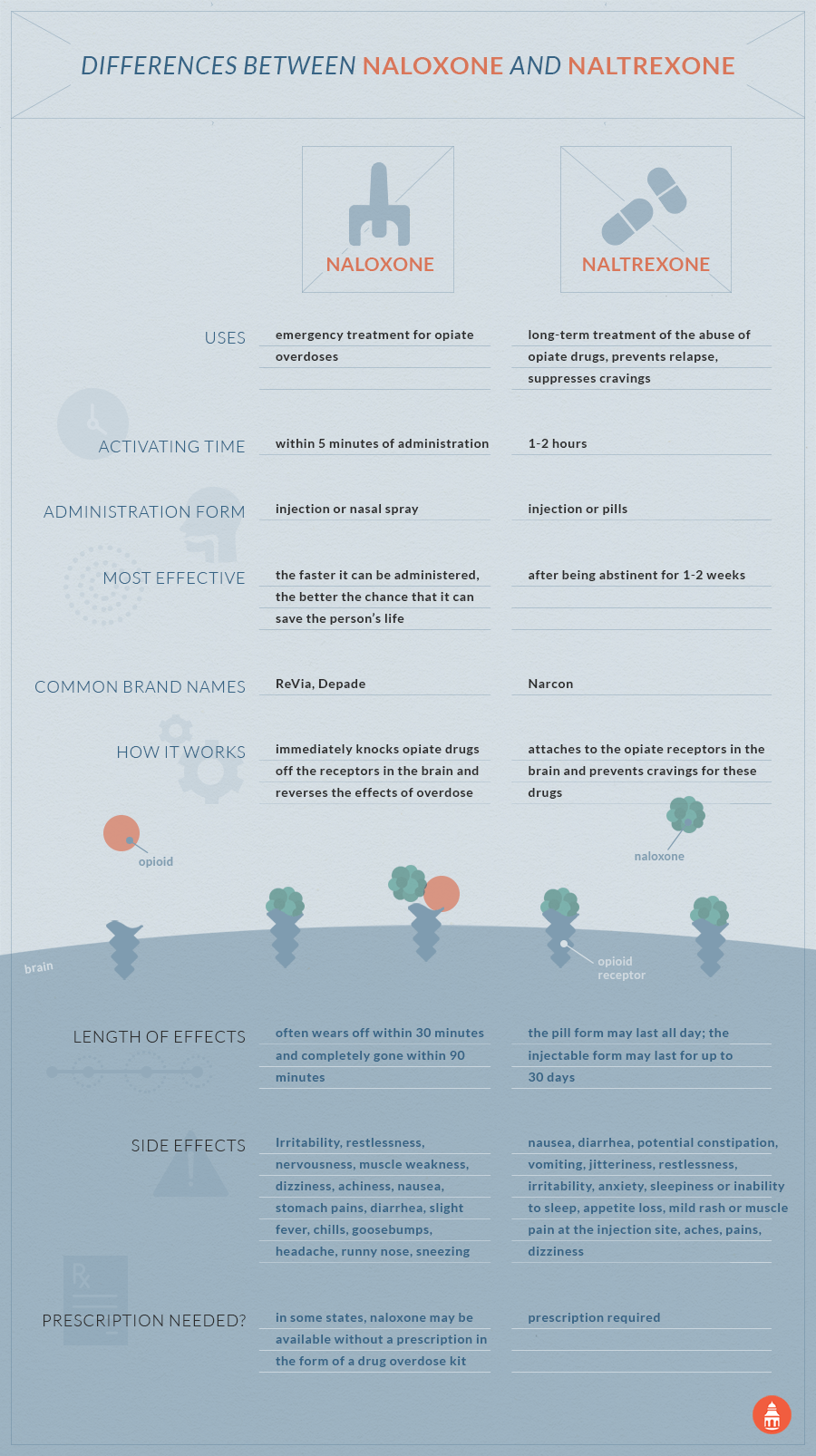 As mentioned above, naloxone acts quickly and is most often administered in a single dose. The effects of the drug will most often wear off within 30 minutes and are completely gone within 90 minutes. This allows a person’s system to recover from abuse of most opiate drugs, but if a person has taken a longer-acting opioid drug and overdosed, the person may need another dose of naloxone.

The pill forms of naltrexone are typically designed to be used once a day, most often in the morning. This drug is much longer-acting, its effects are not felt immediately like with naloxone, and the drug’s ability to suppress cravings typically lasts all day. In addition to the pill forms mentioned above, there is also an injectable form of naltrexone (Vivitrol) that is even longer-lasting and reduces the need to take the pill forms every day; the injectable form may last for up to 30 days.

There is no such thing as a medication that does not have some side effect profile associated with its use. Not everyone will experience the side effects listed here, and some individuals may have side effects that are not listed. However, because all chemical substances taken by a person result in the alteration of neurotransmitters, hormones, bodily processes, etc., there is always some type of side effect associated with their use.

Some of the common side effects associated with naloxone include:

The common side effects associated with naltrexone include:

Naltrexone should not be used by individuals who are actively taking opiate drugs because this can result in the potential for opiate drug overdose. Individuals who take these drugs and begin to experience allergic reactions or rare side effects, such as chest pains, hallucinations, convulsions, etc., should stop using the medication and immediately contact the prescribing physician.

Research published in journals like the American Journal of Public Health report that the prescription rate for anti-addiction drugs like naltrexone and naloxone is far lower than the prescription rate for opiate drugs. For instance, it is estimated that more than 900,000 physicians can write prescriptions for opiate pain medications but fewer than 40,000 are authorized to write prescriptions for anti-addiction medications. In addition, the research suggests that less than half of individuals with opiate use disorders (opiate abuse or addiction to opiates) have access to these types of drugs.

Naltrexone and naloxone are similar drugs that have very different uses. Naltrexone is primarily used by people who are in recovery for some type of substance abuse issue to suppress cravings for their drug of choice and to prevent relapse; its use is most often associated with recovery from alcohol or opiate drug abuse. It is most effective after a person has already achieved abstinence for 7-10 days.

Naloxone is a drug that is primarily used to reverse the effects of an overdose on opiate drugs. It can be a lifesaving treatment in these cases. It may also be included in some medications as a potential safeguard against abusing the drug.

Naltrexone and naloxone are not significant drugs of abuse. They have little potential for abuse, as they do not produce the euphoric effects sought after by drug abusers.