Side Effects of Methadone Use (Short and Long-Term) 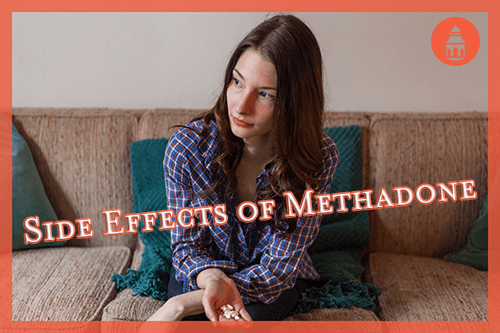 Methadone has been used in the United States since shortly after it debuted in Germany in 1939. It originated as a pain reliever with less addictive properties than the go-to painkiller of the time, morphine. In addition, methadone is often used as a treatment for heroin and other opioid addiction.

There are, however, significant dangers associated with use of methadone, including serious potential side effects.

Shortly after methadone hit the market and its pharmaceutical manufacturer, IG Farben, announced that it had little potential for addiction, both citizens of the UK and US began seeing dangers related to its use. In fact, the number of individuals addicted to methadone jumped from 21 in 1955 to 60 in 1960.

In the US, as medical professionals began prescribing methadone to treat heroin addiction, many individuals used the drug until withdrawal symptoms abated and then resumed heroin use once again.

From the 1950s to 1970s, those who took methadone suffered from various side effects, such as:

Side Effects of Recommended Use

According to the Centers for Disease Control and Prevention, 4.4 million of the 247 million opioid prescriptions written in 2009 were for methadone. Even when used as prescribed, methadone has the potential to cause negative health effects.

Some of the potential short-term effects include:

Long-term use of methadone can lead to lung and respiration problems, even when used as prescribed. Women who take methadone may experience changes in their menstrual cycles or even miss periods.

Many individuals take methadone in a treatment clinic and then return home after taking it while others have a prescription for methadone so they can take it at home. The individuals who are able to take the medication at home are more at risk for serious side effects since their use isn’t monitored. The prescribed dosage must be adhered to, and a person may not take the medication at a later time if a dose is missed. Methadone is a long-lasting opioid; therefore, when a person takes dosages too close together, it can cause an overdose.

Only about 2 percent of prescriptions for painkillers were for methadone in 2010, reports the Centers for Disease Control and Prevention (CDC). Despite the CDC reporting a low percentage of prescriptions for methadone, the drug contributes to more than 30 percent of the painkiller overdoses in the US. The number of deaths related to methadone overdoses has increased tremendously throughout the years; in fact, it has sextupled from 1999 to 2009.

Taking methadone with other substances increases its potential side effects. The US Food and Drug Administration states that methadone has the potential to depress the respiratory system. This effect is heightened when taken with other opioids or depressants, making overdose even more possible.

With prolonged use, addiction to methadone can form. Addiction may lead to stealing pills, taking someone else’s prescription in an attempt to fill it personally, or searching for harmful alternatives to suppress or ease the symptoms of withdrawal.

Pregnant women may continue taking methadone in some cases, but decisions are made by prescribing doctors on a case-by-case basis. It is not believed that methadone has the potential to harm an unborn baby, but the child may go through withdrawal after birth. In many instances, women must continue methadone throughout their pregnancies to avoid the risk of miscarriage. It is only safe to use methadone during pregnancy under the direct supervision of a licensed medical professional.