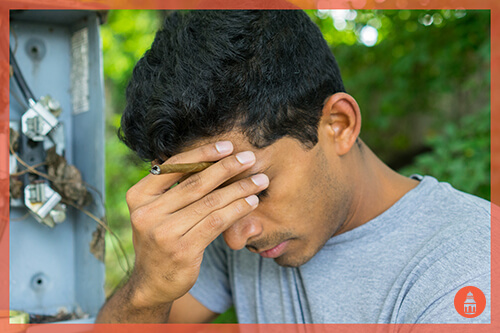 Early depictions of cannabis withdrawal, such as in the movie Reefer Madness, portrayed the withdrawal syndrome as being equivalent to withdrawal from opioid drugs, such as heroin, or even withdrawal from alcohol. As marijuana use became more acceptable, but not legal, in the 1960s and 1970s, these earlier notions of marijuana as a seriously addictive drug were abandoned in favor of the notion that marijuana use does not result in the development of physical dependence.

This set of beliefs continued for many years until more formalized empirical research studies on the effects of discontinuing marijuana, especially after chronic use, were published. As a result of the empirical research evidence, there is now an identified set of diagnostic criteria that can be used in the formal diagnosis of withdrawal from cannabis products.

The American Psychiatric Association (APA) clearly defines a withdrawal syndrome as the onset of specific symptoms, which can be physical symptoms, psychological or emotional symptoms, and even behavioral symptoms, that occur as a result of discontinuing a drug that has resulted in the development of physical dependence. The APA lists formal diagnostic criteria that can be used to diagnose withdrawal from cannabis in its current edition of its diagnostic manual, the Diagnostic and Statistical Manual of Mental Disorders – Fifth Edition. This set of diagnostic symptoms typically occurs within one week of discontinuation.

Individuals must experience three or more of the following: 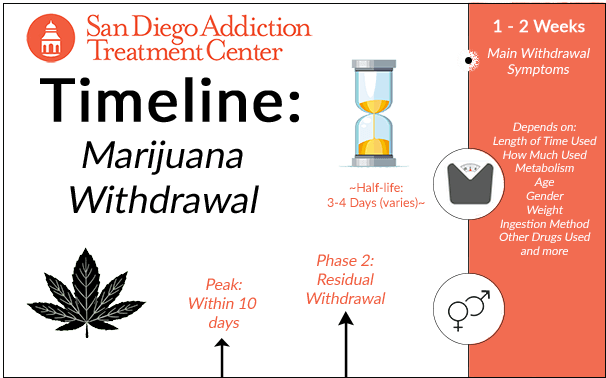 This withdrawal syndrome most often occurs in people who have used marijuana daily or almost on a daily basis for a period of at least several months. Occasional users may experience some withdrawal-type symptoms, but may not display enough symptoms to satisfy a formal diagnosis of withdrawal.  The withdrawal symptoms cannot be better explained by some other medical condition or by some other formal psychiatric disorder, and they cannot be better explained by the use of other drugs or withdrawal from other drugs.

In individuals who have consistently used marijuana along with other drugs of abuse, such as alcohol or prescription medications, it may be difficult to ascertain whether the symptoms represent withdrawal from marijuana, withdrawal from the other drug of abuse, or a combination of both.

However, the formally identified withdrawal symptoms associated with cannabis use do not include hallucinations, seizures, delusions, etc.

APA reports that most of the symptoms that occur as a result of cannabis withdrawal appear within 24-72 hours after one stops using cannabis products. They peak within the first week following discontinuation and have a duration of 1-2 weeks in most individuals; however, sleep difficulties may persist for more than 30 days. Adults often display more severe withdrawal syndromes than adolescents, and this is hypothesized to be related to adults using the drug more frequently and in higher quantities than younger individuals.

Additional research has suggested an outline for a formal timeline for withdrawal from cannabis products. While the actual individual experience of the withdrawal syndrome will vary from person to person, a general model of the timeline for cannabis withdrawal based on other research studies suggests the following:

That being said, individuals who are in recovery from substance use disorders will often experience intermittent issues with mood, cravings, restlessness, boredom, etc., that are claimed to be the symptoms of PAWS. These issues do not appear to be the direct result of the withdrawal process.

While the withdrawal syndrome associated with cannabis is not normally considered to be potentially physically dangerous or life-threatening, it should be noted that anyone undergoing withdrawal from any substance use disorder is at risk for potential issues resulting from accidents, dehydration, poor judgment, and self-harm as a result of emotional distress. Individuals undergoing withdrawal from any drug are at a higher risk to relapse because using one’s drug of choice will result in a relatively rapid reversal of the symptoms one is experiencing.

For these reasons, it is advisable for anyone who suspects they have a substance use disorder to consult with a physician before discontinuing their drug of choice.

Professionals trained in addiction medicine can institute a formal physician-assisted medical withdrawal management program that will significantly reduce the discomfort associated with the withdrawal process as well as reduce any potential risks.

A number of medications have been demonstrated to have utility in the treatment of the symptoms that occur with withdrawal from cannabis:

The use of any medications to assist individuals who are undergoing withdrawal from marijuana or other cannabis products should only be undertaken with the supervision of a physician.

In addition, individuals who have cannabis use disorders and wish to stop using marijuana or other cannabis products will need to get involved in a formal substance use disorder treatment program that includes therapy, social support, and long-term aftercare management in addition to initially undergoing any withdrawal syndrome. Simply going through the withdrawal process without getting formal treatment that addresses a person’s issues that led them to engage in substance abuse is associated with an extremely high potential for relapse.