What Is the Risk of Getting HIV/AIDS Through Drug Use? 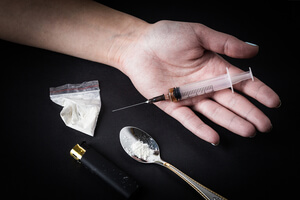 Drug use—and the behaviors that sometimes accompany it—can increase the risk of contracting HIV. In 2016, about 30,000 new cases of HIV were attributed to sexual contact, and around 2,000 people contracted HIV from injecting drugs.1

Sharing needles, syringes, or other drug equipment can expose people to HIV.2 However, certain types of substance use are also linked to risky sexual behavior, such as having impulsive sexual encounters or not using condoms—which can also increase the risk of exposure to HIV and other sexually transmitted diseases.3

People who are both HIV positive and overcoming addiction can manage both conditions with an antiretroviral regimen and rehabilitation (medication and therapy). They may also lower the risk of transmission or re-infection. However, even people who continue to use drugs can prevent transmission by following safer practices when they inject drugs or have sex.

HIV stands for human immunodeficiency virus. The virus attacks the body’s immune system, destroying a key infection-fighting type of white blood cell known as a T cell. The destruction of these cells makes the body vulnerable to infections and disease.4

HIV is a progressive infection, with 3 stages:4

How Can It Spread? 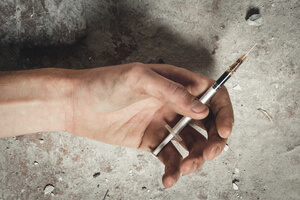 HIV is spread when a person has contact with blood or other bodily fluids infected with HIV.2 Sexual contact is the most common route of HIV transmission. Needle drug use results in thousands of additional HIV infections every year. When a person injects drugs with a needle used by someone who has HIV, there is a serious risk of being infected. In addition, even if needles are not shared, blood can be present in the water or cotton used to filter and inject drugs.3

However, injecting drugs is not the only way drug use can increase the risk of contracting HIV. When a person is high, they may be more likely to have unprotected sex or have sex with someone they do not know. In some situations, a person may have sex to obtain drugs or get money for drugs and, in doing so, may be exposed to the HIV virus.

Some drugs have been associated with risky sexual behavior and/or a heightened risk for contracting AIDS/HIV, including:3

HIV Rates From Drug Use

According to the Centers for Disease Control (CDC), for every 10,000 exposures, the risks of acquiring HIV from an infected source are the following:5

The CDC notes that HIV diagnoses for people who inject drugs have decreased over the past several years. However, they have decreased more among certain ethnic groups than others.6

The CDC also reports that fewer blacks and Hispanics are sharing needles and syringes. Whites are more likely to share them, and they are also more likely to start injecting at younger ages.6

HAART prevents the virus from replicating and can slow down the progression of the disease.

The standard of medical treatment for HIV is known as highly active antiretroviral therapy, or HAART. HAART is a combination of 3 or more drugs customized to a person’s specific symptoms, strain of the virus, and viral load. HAART makes HIV a manageable condition, if the medications are taken as prescribed. HAART cannot cure HIV, and a person cannot stop taking the drugs without experiencing a progression of the disease.7

As with most medications, HAART has side effects, which can include:9

Over time, more serious side effects can occur, including:9

People with HIV who are also intravenous drug users may not receive HAART as often as people who don’t inject drugs, perhaps due to the belief that the person’s use of drugs makes treatment less effective. However, findings from recent studies indicate that intravenous drug users who receive HAART have similar outcomes in terms of life expectancy to HIV-positive people who don’t inject drugs.10

Further, when intravenous drug users receive treatment for opioid addiction with opioid replacement drugs such as buprenorphine or methadone, they are more likely to follow through with HAART. In general, buprenorphine is the treatment of choice in people with opioid dependency who are also HIV positive because it is less likely to interact with drugs that treat HIV.10

Prevention is still the best tool to fight HIV. Some ways you can protect yourself from exposure to HIV include the following:3

Syringe services programs (SSP) can also help reduce the spread of HIV. These programs provide sterile syringes to people who inject drugs, referrals to treatment, access to HIV testing and treatment, and information on treating drug overdoses. Around half of all intravenous drug users received some form of service from an SSP in 2015. However, only about a fourth of intravenous drug users received all of their syringes from an SSP.6

What Challenges Are Presented?

There are several challenges to HIV prevention and treatment in the intravenous drug user community. Barriers to effective prevention include the following:11

The most effective approach to HIV prevention appears to be a multi-tiered approach, where the medical community, social services, and law enforcement work together to provide education, testing, and interventions such as clean syringes and treatment for both HIV and drug abuse.

If you or someone you know uses drugs and is at risk of HIV, considering getting help through a drug rehab center. If you aren’t comfortable entering rehab, take steps to minimize your risk of HIV infection (e.g., syringe services programs), get tested regularly, and find treatment help if needed.