Heroin is an opioid or narcotic drug. All opiates are derivatives of the poppy plant and share similar properties. Thus, all opioid drugs are derivatives of opium, and every drug in this class has a high potential for the development of physical dependence and abuse/addiction. Heroin is considered to be one of the most addictive drugs of abuse available. 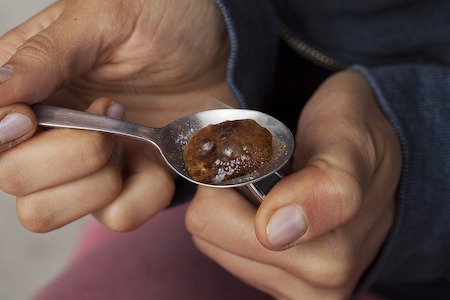 Heroin is associated with an interesting history that may be surprising to some readers. According to the book Heroin: Its History, Pharmacology, and Treatment:

Even though the United States Drug Enforcement Administration classifies heroin as a drug without medicinal uses, the drug does have several potential medicinal uses.

Heroin on the street may have different colors. According to Heroin: Its History, Pharmacology, and Treatment, it appears that the color of heroin is associated with its origins.

A Bevy of Names

There are also regional names that come from inner-city suppliers, such as “Gucci.”

A number of other popular slang phrases are associated with heroin use or withdrawal from heroin:

Heroin’s Effects on the Brain, Body, and Behavior

Individuals who use heroin typically inject, snort, or smoke it. Heroin use has a number of specific effects on the brain and body of individuals who take the drug. According to the National Institute of Health and a number of other academic sources, when heroin is taken, it crosses the blood-brain barrier (a safeguard in the body to keep foreign substances from entering the brain) and is converted back into morphine. Heroin then binds with neurons known as endogenous opioid receptors, which are neurons in the brain that are specialized to control the perception of pain, exertion, and behavior reinforcement.
The endogenous opioid receptors are also located heavily in the area of the brain known as the brainstem, which controls basic automatic functions that maintain life support, such as breathing rate, blood pressure, level of arousal, etc. Heroin use is associated with a suppression of basic bodily functions controlled by the brainstem. One of the most important of these is in individual’s respiration rate.

Heroin overdose often results in a comatose state where these processes are suppressed to the point of the individual losing consciousness. The resulting lack of oxygen due to decreased respiration can lead to significant damage in the brain and other organs. In extreme cases, oxygen can totally be shut off due to extremely suppressed or halted respiration (a condition known as anoxia), and the individual can develop severe brain damage or even die. Even chronic hypoxia, which is decreased oxygen supply to the brain as opposed to a total lack of oxygen (anoxia), can occur from heroin use and result in a number of consequences as a result of brain damage, including issues with thinking and judgment.

The immediate effects associated with heroin use typically include:

It is also not uncommon for individuals to experience an itching sensation and/or become nauseous. Individuals using heroin may become lethargic, be very pleasant, become anxious, and demonstrate significantly slowed thinking processes and often slurred speech.

Complications of Heroin Use

Other general issues that can occur in chronic users include prolonged issues with constipation, disruption of one’s sleep cycle, sexual dysfunctions, menstrual issues in females, physical damage as a result of use (e.g., nasal damage if snorted, issues with the skin, etc.), and a high probability that the individual will engage in risky behaviors, such as needle sharing (which can lead to the person acquiring certain blood-borne diseases), illegal activities (such as theft or other crimes to obtain more heroin), financial issues, and troubles with one’s personal and professional relationships.

Of course, chronic users of the drug will inevitably develop physical dependence on the drug (the acquisition of both tolerance and withdrawal syndromes) and are highly likely to develop a formal addiction to the drug.

Heroin is a drug that was initially developed to be a nonaddictive alternative to morphine use in the control of chronic pain, and it was originally marketed for a number of medicinal purposes. The drug was initially embraced in the United States; however, once its highly addictive potential was recognized, the government made the drug illegal in all forms. It is considered to be a drug that has no legitimate medicinal purposes in this country.

Nonetheless, the drug is still used in other countries for the control of pain and for other medicinal uses. In a very few countries, individuals are allowed to possess small amounts of the drug for personal use (e.g., the Czech Republic). However, the manufacture and marketing of heroin are deemed illegal in the majority of countries around the world. The drug is highly addictive and associated with a number of detrimental physical, mental, and emotional effects when chronically abused.