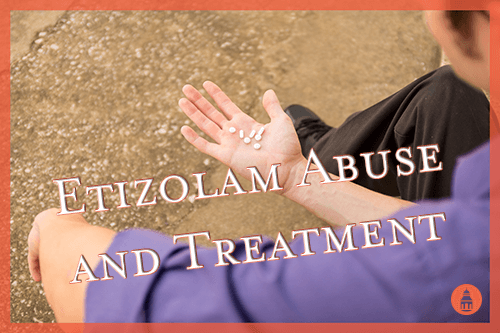 Etizolam is the generic name for a medication related to benzodiazepines. It belongs to the thienodiazepine class of chemicals, which features several substances that act on the GABA receptors in the brain. Etizolam is stronger and longer-lasting than benzodiazepine medications, such as Valium, Klonopin, or Xanax. Because of the substance’s potency differences, etizolam is not legal in the United States and much of Europe, although it is legal to prescribe this medication to treat some conditions in Japan, India, and Italy.

How Does Etizolam Affect the Brain and Body?

Effects associated with etizolam include:

While the chemical structure is like that of a benzodiazepine, the small differences mean that etizolam is between six and ten times more powerful than diazepam, the generic version of Valium. Like benzodiazepines, etizolam and thienodiazepines can rapidly lead to physical dependence, tolerance, and have similar reward system-stimulating, rewarding effects.

Etizolam is such a potent central nervous system (CNS) depressant, it acts similarly to powerful sedatives like barbiturates.

The drug is not listed in a schedule through the Controlled Substances Act (CSA), but it has not been approved for use in the US, so possession of this drug by Americans indicates abuse.

According to the Drug Enforcement Administration (DEA), people of all ages, genders, and socioeconomic classes may abuse etizolam. The drug is sold online and occasionally in head shops where it is marketed as a research chemical that is “not for human consumption.”

It is not widely abused in the US, but more people are reportedly taking the substance. The National Forensic Laboratory Information System (NFLIS) reported three instances of etizolam seizure by the DEA in 2012. In 2013, there were 92 seizures of the illicit substance, and in the first six months of 2014, there were 45 reported seizures. Between October and December 2015, the San Francisco branch of the California Poison Control System reported that eight individuals were hospitalized because they consumed counterfeit, likely illicit, alprazolam tablets; these tablets primarily contained fentanyl, a dangerous opioid drug, but some contained etizolam. Before 2012, however, there were no reports of etizolam being seized by law enforcement.

Recreational Misuse and Abuse in the US

Since etizolam is not a prescription medication in the US, when a person has this thienodiazepine drug, it most likely means they are struggling with abuse. When abused, etizolam is typically found in powdered form; this can be mixed into water and orally consumed, injected into a vein or muscle, or snorted. In some cases, etizolam has been found on blotter paper.

The World Health Organization (WHO) published findings on etizolam over several years of medical studies on prescription use in some countries. Human studies have found that, at closely monitored low doses, etizolam can be an effective treatment for generalized anxiety with depression and insomnia.

While the drug may have important medical uses, it is still not used as a prescription substance in the United States. Because etizolam remains legally unscheduled, it is not acceptable to prescribe, but it can occasionally be imported and sold. This means that people who struggle with sedative abuse, including of benzodiazepines or alcohol, may seek out etizolam because of its potent action on the GABA receptors and take the drug to replace lower-potency substances.

Etizolam was first introduced in Japan in 1983 as a prescription medication treating neurological conditions, including anxiety, insomnia, and panic attacks. Currently, the drug is prescribed in 0.25 mg, 0.5 mg, and 1 mg tablets. Some medical studies have suggested that etizolam can replace the barbiturate drug pentobarbital because it lasts longer and has fewer dependence or addiction-related side effects. Some prescription uses of etizolam in other countries may include sedation prior to surgery, as muscle relaxants or antipsychotics, and for similar short-term needs.

In the US, benzodiazepine abuse is widespread. People who struggle with Klonopin, Xanax, Valium, and related drugs may escalate their abuse of these substances as their bodies develop a tolerance to the presence of these GABA agonists. 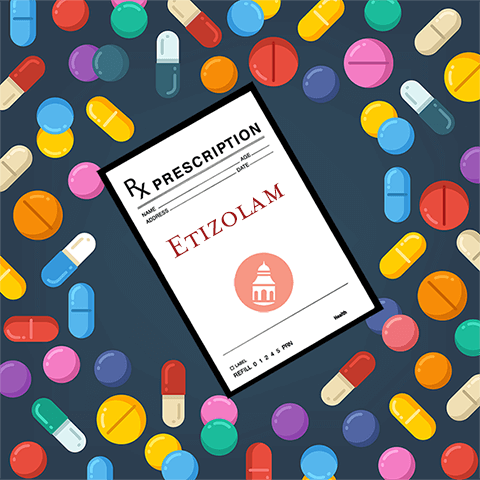 Some people may feel that they need more of these benzodiazepine medications than they can acquire or that large amounts take too long to become effective. This may lead them to illicitly purchase and abuse etizolam, to achieve similar sedative effects.

Signs of intoxication on etizolam are like those associated with benzodiazepines. They may include:

The main indicator of etizolam abuse, or a serious side effect, is daytime drowsiness. While there are many medications that can cause this, if a person has not received a prescription for a sedative medication and begins to become drowsy or excessively sleepy during the daytime, they may be abusing a CNS depressant of some kind, including etizolam. Etizolam’s half-life is about 3.4 hours, so the effects peak anywhere between three to five hours, or six to eight hours, depending on dosage.

Other indicators that someone may be abusing etizolam include:

Overdose and Other Health Issues Associated with Etizolam

Since etizolam is more potent than its benzodiazepine counterparts, overdose may appear similar to an overdose of Valium, or it may have symptoms closer to those associated with barbiturates.

Signs of a benzodiazepine overdose include extreme intoxication, as though one is drunk as well as:

Signs of a barbiturate overdose include:

Etizolam is being imported illicitly into the US and sold as a substance of abuse, but some may purchase the drug as a date rape drug. Since etizolam is very potent, it creates an amnesia-like effect and lowers inhibitions like alcohol does; a person who has been given etizolam may not remember what happened to them.

Get Help with Etizolam Abuse

Withdrawal symptoms associated with benzodiazepines, which may be part of etizolam abuse, include:

These are likely to begin as the drug wears off, after about eight hours; peak withdrawal symptoms occur between three and five days after the last dose. During this time, the person who stopped taking etizolam is at much greater risk of relapsing back into substance abuse, so their risk of experiencing an overdose is much higher.

To safely detox, avoid relapse and overdose, and reduce the risk of life-threatening seizures, it is important to work with an addiction specialist who understands etizolam addiction and benzodiazepine abuse. An addiction specialist can manage withdrawal using a tapering program and a replacement benzodiazepine; then, they can ease the person into a comprehensive rehabilitation program. Therapy is the backbone of addiction treatment, helping individuals to cope with relapse triggers and find firm footing in recovery.