Poppers (Amyl Nitrate): How Neurotoxic Are They? 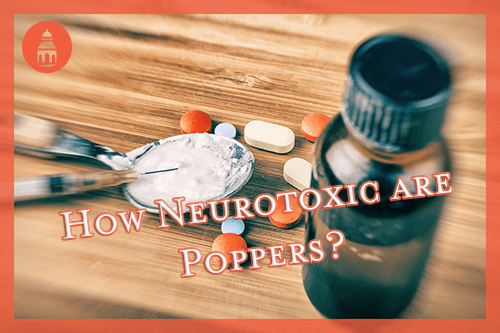 The term poppers refers to a few street drugs that are snorted or inhaled. Although amyl nitrate is the most infamous of the chemical formulas, poppers are not exclusively this molecule, and in fact, many people confuse amyl nitrate and amyl nitrite. The chemical amyl nitrate is an additive to fuel, and like other industrial chemicals abused as inhalants, it can cause a brief, intense, and dangerous high; amyl nitrite, on the other hand, was developed to treat angina or chest pain related to heart disease. However, amyl nitrite is also abused for nonmedical reasons, specifically as a party drug that initially became trendy among gay men.

The amyl groups have become closely scrutinized, and many countries around the world have passed laws regulating the sale and prescription of these drugs or banning them altogether. While poppers are still widely available and abused, the chemical composition is different. Alkyl nitrite is the primary chemical abused, but other versions, including butyl nitrite, are also illicitly sold.

The slang term poppers comes from the original version of the prescription medication amyl nitrite, which was available in ampules that were popped open so the gas could be inhaled. Amyl nitrite, nitrate, and alkyl nitrite have been used as angina medication since they were first developed for this use in 1844, but they have also been illicitly abused drugs, especially among gay men and club culture, since the 1970s. The chemicals in this family can cause a “rush,” a rapid-onset euphoria that can lead to brain damage and problems with circulation.

All chemical formulas of poppers are vasodilators, meaning they relax or widen the blood vessels to allow better oxygen flow through the body. Some of these chemicals increase heart rate, too, leading to increased risks.

The Neurotoxicity of Poppers

Any drug that changes how blood flows through the body puts the brain at risk of damage. In addition to damage to the cardiovascular system, liver, and kidneys, poppers are very neurotoxic. One study from 2016 reported that three types of alkyl nitrites – butyl nitrite, isobutyl nitrite, and isoamyl nitrite – reduced the ability of rodents to perform tasks involving learning and memory. When mice were given these drugs, they were unable to learn information about a water maze, and they were also unable to remember important information when reintroduced to the maze.

Since poppers have been abused by adolescents, gay men, and young adults for several decades, medical researchers have evidence that abuse of these drugs can cause irreversible brain damage. The cerebral cortex and cerebellum are the areas most affected, so sensory processing, movement and balance, vision, learning, language, mood, and cognition are greatly harmed.

The exact mechanisms that lead to brain damage from abusing poppers are complex, but sudden, rapid opening of blood vessels, quick changes in blood pressure, and the speedy introduction of damaging chemicals can all quickly damage areas of the brain by starving it of oxygen. This drug is toxic to many organs in the body, but it is especially neurotoxic.

Although poppers are not considered addictive in the same way that opioids or alcohol may be addictive, there are people who have abused poppers consistently for a long time, and this has caused a form of drug dependence. Following detox, an evidence-based rehabilitation program that provides counseling to change behaviors around intoxicating substances is needed. If you do not stop abusing a dangerous drug like poppers, you are at risk of sudden death or chronic health problems, including brain damage.

Poppers are extremely dangerous and can lead to sudden death at any time, so it is important to get medical help detoxing from these drugs.