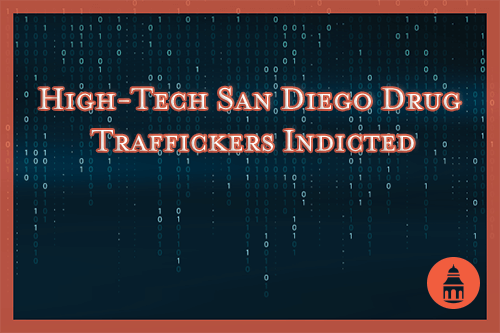 Drug cartels, gangsters, and other criminals are going high-tech, and up until a few weeks ago, many depended heavily on a company called Phantom Secure. Founded and run by Vincent Ramos, the company provided expertly encrypted messaging capabilities to their clients, most of whom used the super encrypted devices to protect themselves from prosecution by law enforcement.

Ramos was arrested in Washington based on a warrant secured in San Diego. He was indicted by a federal grand jury in San Diego, along with four other people who allegedly worked with him to knowingly provide criminals with the ability to maneuver outside the law.

The investigation into these arrests has been long in development and complete with undercover agents who worked in multiple countries, including Australia, Hong Kong, Panama, and Thailand as well as the US, to track down the evidence needed for trial.

Officials estimate that about 20,000 communication devices that are heavily encrypted by Phantom Secure are in circulation and about half of these are being used for criminal purpose in Australia alone. They also say that the Mexican Sinaloa cartel, biker gangs, and other criminal organizations also work with Phantom Secure devices.

Bank accounts and property were seized all over Los Angeles, and more than 1,000 of these phones were seized through warrants executed in Australia. It is expected that more search and seizures as well as more warrants and arrests will follow.

A New Kind of Case for an Underground Industry

According to the FBI, the charges against Ramos of racketeering conspiracy as well as conspiracy to aid and abet the distribution of illicit substances launched a unique case. It is not, however, a unique company, as Phantom Secure is far from the only company in this industry.

For example, Phantom Secure offers six months of encrypted service for anywhere from $2,000 to $3,000. However, part of the agreement requires that users only use their devices to communicate with others on the network, but if they would like to speak to someone on another encrypted server, they can as long as they go through the proper channels.

This means that though Phantom Secure is the first company of its kind to be brought down in this fashion, it is not the only one in existence, and this will not be the last case of this kind.

Said the director of the FBI in a statement: “The indictment of Vincent Ramos and his associates is a milestone against transnational crime.”

During the course of this investigation, there have been a number of cases to develop that involved Phantom Secure devices, and the details of many of these were included in the complaint against Ramos. One of those cases happened here at home: Owen Hanson, a former USC football player, was found guilty of running a gambling and drug trafficking organization responsible for the distribution and sales of thousands of pounds of ecstasy, heroin, methamphetamine, and cocaine here in San Diego. It was a drug bust that was huge in 2015, and the specifics of Phantom’s involvement in the case were included in the Ramos complaint. For example, it was noted that the undercover agent who infiltrated that drug ring was unable to secure an encrypted phone from Phantom Secure until the defendant vouched for him personally with the company. It is standard procedure for Phantom Secure to take on no new clients or customers unless they are referred by a current customer and agree to a full background check that is facilitated by email with code names.

It was also noted in the complaint that, after the defendant was arrested, Phantom Secure sent a wipe command to the phone to erase all data and incriminating evidence, and it only failed because it did not connect in time.

The complaint went on to say that a man named Marc Emerson took over the gambling and drug trafficking ring in Hanson’s stead. Emerson, too, used a Phantom Secure phone to conduct illegal business. In the course of a drug transaction, another person involved in the exchange of 194 kilos of cocaine warned Emerson that his phone would be wiped if he didn’t check in at a certain time – and it was.

Ramos has pleaded guilty and will spend years in jail as a result of his choices. Hanson, too, will be in jail for years. Emerson died of an overdose. For those who are living in active addiction and striving to be a player in the drug trafficking game, either of these eventual outcomes is likely. The only way to safely escape these consequences is to undergo treatment that provides a new way of living life, substance-free.

If you, or your loved one, are in crisis due to addiction, are you ready to take action?