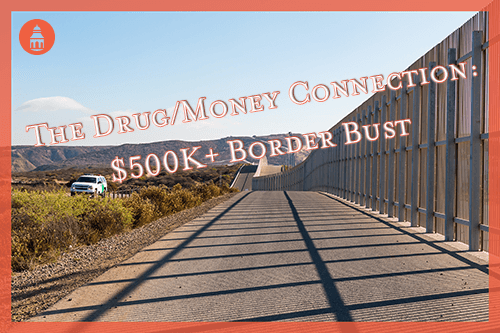 At the end of last month, a woman was stopped near Oceanside on I-5, and when a Border Patrol K-9 alerted officers, an investigation of her car revealed a suitcase containing $532,596 in cash. The money was suspected to be related to illegal narcotics sales and ostensibly on the way to drug cartels in Central or South America as the woman was intercepted going southbound on I-5.

While $532,000+ is no small change, the fact is that to the drug cartels, these seizures represent little more than the cost of doing business. The millions brought in by drug sales compared to the low cost of production make for such big profit margins that they will take the risk again and again – and sacrifice people, like the woman above who was arrested on drug charges, along the way.

When it comes to illegal drug sales, it is and has always been about the money, first and foremost. Drug traffickers care only about getting the most profit out of their time and investment, and nothing for the people who use their product. As a result, people are dying. In an effort to “win” the crowded market and secure customers the fastest, many add potent additives to their wares, unbeknownst to the customer. That is, people who go in search of heroin may end up using pure fentanyl or heroin laced with fentanyl with devastating results. It is impossible to see fentanyl in a bag of heroin with the naked eye or to recognize it in a counterfeit pill manufactured to look exactly like the real thing, and too often, overdose is the result. Whether the person who is the end user lives or dies, whether any of the middle men along the way end up incarcerated or strung out themselves, the drug cartels still get their money.

When it comes to illegal drug sales, it is and has always been about the money, first and foremost.

To a family living with addiction here in the United States, where those drugs come from and the motivation behind their sale means little in the face of the hardship caused by use of the substance. The daily threat of arrest, overdose, and physical as well as emotional imbalance is more than enough to keep up with, but it is important to recognize and acknowledge the source of the substances of abuse. When it comes to global ills, widespread harm, and toxic political and environmental issues, drug cartels are at the heart of most of them, especially on the other side of our shared border. Though some justify ongoing drug use as a right and a matter of free will, choosing to avoid treatment when addiction is an issue only serves to keep murderers in business – people who do not value your life or the life of your loved one.

As we head into the new year and make commitments to improve our own quality of life and make healthier choices, you have the opportunity to make a significant impact at home. If substance abuse or addiction is a very real problem for someone in your life, you can resolve to create boundaries that will help them to move closer to a treatment program that can help them to heal. The sooner that your loved one stops using all substances of abuse, the sooner they can ensure their own personal safety from overdose and play a positive role in stopping the widespread harm caused by the drug industry.

But that’s just the first step. You can vote on legislation that would increase access to treatment for families who are in crisis. You can share your story and let others who are struggling know that there is hope through treatment. You can continue to pay attention to what is happening in your community and take action whenever you see the opportunity.

What will you do to help undermine all the threats of addiction in your community and in your home in 2018?