Rate of Drug Deaths Continue to Climb in San Diego 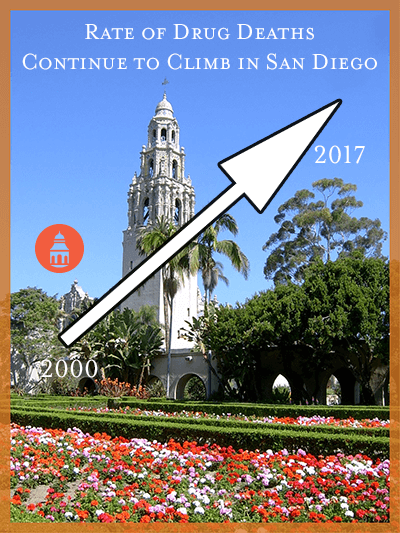 San Diego has not been immune to the epidemic of opiate addiction and overdose deaths that continues to take more than 100 lives a day on average across the country. This is a rate that is three times what it was in the year 2000.

Why? Overprescription of addictive pain medications led to an increase in accidental overdose and unintended addiction, which in turn led to a crackdown on prescription practices. The people hit hard by addiction did not turn to treatment but instead sought out a cheaper and more accessible source for their high: heroin. Though heroin is illegal, it was easier to purchase heroin on the street than it was to get prescription painkillers legally, and many developed a heroin addiction as a result.

Compounding the problem was the ongoing fight of the drug cartels to supply a stronger and more potent product than their competitors. In an effort to do this, many began lacing heroin with fentanyl, a synthetic opiate drug that is 100 times stronger than morphine alone. Though many long-term addicts with high tolerances seek out the drug in an effort to get high, others may not even know that the drug they are using has any amount of fentanyl. It’s an unwelcome surprise that can mean instant overdose and, without immediate and appropriate medical intervention, death.

It is fentanyl that is believed to be the cause of the spike in overdose deaths in the past two years, in San Diego and across the country.

Dr. Glenn Wagner, DO, is the chief medical examiner in San Diego. He says: “It doesn’t take much for some combination, either in excess or combined with alcohol to guarantee you a premature visit to this place. The dead can teach the living, and we should all learn from it.”

For families living with a loved one in active addiction, the fear of losing them to an opiate overdose is constant. Are you concerned that someone you care about may succumb to opiate overdose?

Every day, the people who die include those who have long been abusing the opiate, some who have overdosed in the past, and some who are relatively new to using the drug or only use it on occasion. The fact is that there is no safe use of heroin. If your loved one is using heroin in any form, they are at risk of overdose. There simply is no way to know what is in the drug when it is in purchased or what a “safe” dose looks like, and no way for the individual to respond once they realize something is amiss – if they have time to process a response before it overtakes them.

As a family member or friend of someone struggling with an addiction, it is not easy to live with the unsettling knowledge that there is nothing you can do to “save their life.” You cannot force them to get sober, and you cannot be on standby 24 hours a day to respond should they take too large of a hit. But there are some things you can do that may make a positive difference – both for you and for your loved one.

How will you help your loved one avoid overdose?