Could California Become a ‘Sanctuary State’ from Federal Marijuana Laws? 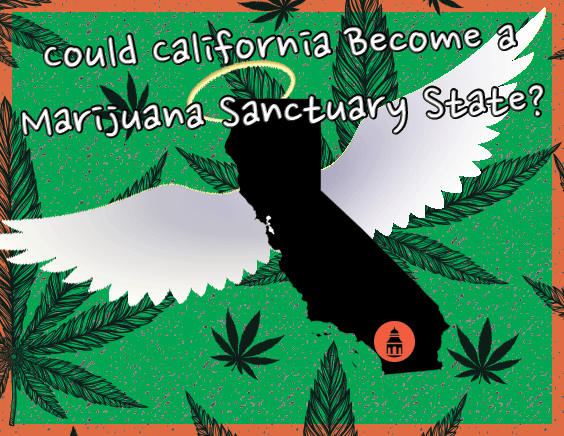 As cities across the state declare themselves “sanctuary cities” where President Trump’s immigration and travel bans will not be enforced by local law enforcement, the state as a whole is taking steps to adopt a similar approach when it comes to federal laws restricting use of marijuana. That is, the California State Assembly recently approved a bill that would prevent local and state law enforcement from assisting federal agents in implementing federal laws blocking use and sales of marijuana.

There is one stipulation: If there is a court order providing for the assistance of California law enforcement, then officers must comply. In all other cases, however, the Assembly asserts that state law will take precedence over federal law when it comes to the medicinal and recreational use of marijuana.

Assemblyman Reggie Jones-Sawyer says that the push to address the issue comes after a perceived threat by Trump’s administration to begin enforcing federal laws in states where marijuana has been legalized for any use at the state level.

Said Assemblyman Jones-Sawyer: “AB 1578 ensures that our limited local and state resources are not spent on federal marijuana enforcement against individuals and entities that are in compliance with our laws.”

Law enforcement officers disagreed and lobbied hard against the bill, and Republican lawmakers, too, were not in support, believing that such a bill would only cause undue strain on the relationship between federal agents and California law enforcement officers and could potentially bring physical harm to local police officers.

Assemblyman Travis Allen, a Republican from Huntington Beach, said: “This is insanity. This is a complete violation of federal law. The hubris of California Democrats believing they can flout federal law on immigration and drug policy is beyond words.”

Despite the work of many to kill the bill, it passed with a bare majority of 41 to 32 and is slated to hit the state senate next.

Proponents of the new bill are quick to point out that they do not support individuals and businesses that are continuing to produce or sell marijuana in violation of state law. They say that they would like to revise the language of the law to make it clear that they support California and local law enforcement in working together with federal drug agents on cases where violation of both state and federal laws are taking place. It is estimated that about 1,400 illegal marijuana businesses are in operation in the Los Angeles area alone; thus, there is quite a bit of work to be done on this front. They suggest that focusing efforts on these illegal operations is of primary concern, and resources should be directed here before any businesses operating legally under state law are touched since drug interdiction resources are limited.

Assemblyman Rob Bonta co-wrote the bill and says it’s important to send a message to businesses working hard to operate within the bounds of California law that their efforts will not be thwarted by federal agents. He said:

People who are compliant with California law and operate within the legal cannabis market should not have to fear that a state or local agency will participate in efforts to punish or incarcerate them for activity that the state and its voters have deemed legal.

Merging of Medicinal and Recreational Use Laws in CA

Another bill approved by the Assembly would merge laws from medical marijuana and Proposition 64 into one. This bill:

What Is Right for You and Your Family?

No matter how the laws change, families in California will have to determine how they will move forward, especially if a member is trying to live a sober life. Unfortunately, regular exposure to marijuana and people under the influence can be a trigger for many, so it is important to have a plan.

How will you and your family manage the changes in drug exposure due to the changing laws?