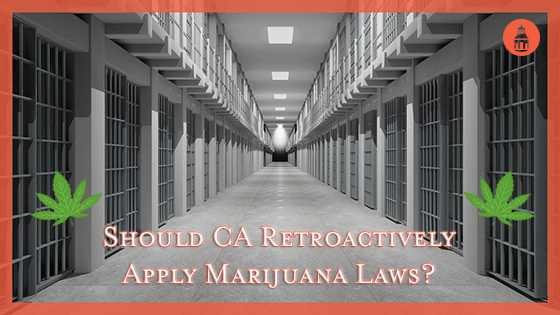 With Proposition 64 came a sweeping change to legislation regarding marijuana in California: the legalization of recreational use and possession of marijuana. Included in the law was the option for any who have been convicted of marijuana offenses in the past to petition the court to have those expunged from their records, but many say the process can be lengthy and expensive.

In order to expedite the process, Assemblyman Rob Bonta is proposing legislation to automatically expunge all criminal convictions for marijuana-related charges, a huge help for those who may be having a hard time gaining employment or finding housing as a result of their criminal record.

Bonta said he hopes that his bill “will give people the fresh start to which they are legally entitled and allow them to move on with their lives.”

Though most felony marijuana charges will likely not be expunged, they may be eligible for a downgrade to a misdemeanor, which will significantly open up options for people who are inhibited in their employment and housing options due to their record as long as there is no reason to believe that that person poses a potential risk to public safety.

District Attorney George has announced that almost 5,000 felony marijuana convictions will be recalled for review and resentenced as a result. Additionally, he says that 3,000+ marijuana-related misdemeanors will be dismissed and sealed. This move will be applied retroactively to all marijuana cases going back to 1975.

Says Gascón: “While drug policy on the federal level is going backwards, San Francisco is once again taking the lead to undo the damage that this country’s disastrous, failed drug war has had on our nation and on communities of color in particular. Long ago we lost our ability to distinguish the dangerous from the nuisance, and it has broken our pocketbooks, the fabric of our communities, and we are no safer for it.”

San Francisco is once again taking the lead to undo the damage that this country’s disastrous, failed drug war has had on our nation and on communities of color in particular.

Some hail this move as progressive and positive, citing its potential to begin the process of repair that is necessary for lower-income, African American, and Latin communities that have been hardest by marijuana-related charges. Supporters hope that this is but the first in a landslide of communities to step up and support their members rather than expecting those who have been harmed by what they perceive as unjust legislation to work out the intricate process by which they can start to undo that harm.

Others say that San Francisco is moving too rapidly and is far too liberal in its application of the law. They suggest that the time and attention of legal offices need to be focused elsewhere right now, especially as the implications of Prop 64 unfold over the next couple of years. They suggest that the attorney general’s office focus on how to limit drugged driving by drivers who are using marijuana legally and protecting children from exposure to marijuana and marijuana-laced products. There are so many potential issues that could arise from the legalization of marijuana for all uses, as seen in Colorado and other states where it has been legal for years, and many are concerned that other counties in California will similarly – as they see it – waste time on this effort when there are more pressing matters to address.

It is important to note that many families who have struggled with addiction find that some of the most devastating and long-lasting consequences are those that come with legal problems. Conviction in the courts means fines and fees as well as, in many cases, a criminal record that follows you in the application process for so many different things in life. For people in recovery, it can be a huge help to be able to escape this shackle and finally live freely in recovery.

In San Diego, there has been no move to expedite the process of expunging criminal records, though those who would like to have marijuana-related misdemeanors expunged are eligible to apply, and those with marijuana-related felonies may also apply for review and resentencing.

Do you think that the option to clear a criminal record is a positive aspect of Prop 64, or do you feel that it is one more thing to tie up the court’s time? How do you think your family will be impacted by the legalization of marijuana in California?