In an effort to solve the problem of people shooting drugs in bathrooms available to mini mart and coffee shop customers, many shop owners across the country are installing blue lights in their bathrooms. Why? The light makes it difficult to see veins, which in turn makes it harder for people with an addiction disorder to shoot up in the bathroom.

The goal is to decrease the problems that go along with people shooting up in bathrooms, which include: 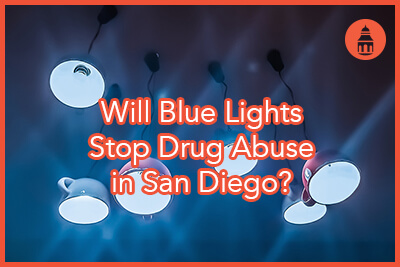 Despite the problems for store owners associated with onsite drug use by patrons, many say that blue bulbs (or red bulbs, in some cases) cause a new set of problems. Though the hope is that drug users will go elsewhere to get high, early studies showed that drug users were willing to take the risk if it meant avoiding withdrawal symptoms. However, with the light obscuring their vision, they are missing veins, which causes health problems and can contribute to an unsanitary mess that is hard to see in the lighting.

Read Hayes is the director of the Loss Prevention Research Council in Los Angeles and a researcher investigating the efficacy of these lights. He says: “The hardest-core opiate user still wants to be accurate. They want to make sure the needle goes in the right spot.”

For long-term drug users, the blue light is no deterrent at all. There are ways to get around it pretty easily, making the blue lights little more than an inconvenience for all patrons and one more tool that serves to stigmatize addiction.

However, shop owners point out that they cannot stand idly by while this continues. They feel that they have no other option, and they say that it’s working for them so far. According to some reports, before installing the lights, they frequently would not know that a drug user in the bathroom was in crisis until someone else wanted to use it. When the door was opened, they would find people slumped over due to overdose, already deceased. Since the installation of the lights, many store owners report that in six months, they have not had a single overdose in their stores.

Is This a Long-Term Solution to the Opioid Epidemic in San Diego?

Though a number of stores and mini marts around San Diego have installed red and blue lights in their bathrooms with the goal of cutting down on drug overdose deaths and risk of harm to employees and customers, many health experts are encouraging other options. For example, many suggest installing “sharps containers” or safe disposal containers for people to throw away their needles without putting them in a trash can where they may stick an employee who is taking out the trash or break the toilet if flushed.

The goal for many health experts is to normalize the disorder of addiction. It is estimated that tens of millions of Americans are struggling with an addiction disorder at any given time, in addition to the tens of thousands who die of drug overdose every year. Every year, the problem grows, stealing more and more lives and destroying more and more families. Clearly, continuing to stigmatize the disorder or criminalize those who suffer from it has done little to quell the problem.

The only research-based path to overcoming an addiction that has been proven time and again is comprehensive and intensive drug addiction treatment. Because addiction is a medical and psychiatric disorder, research-based care is necessary. Criminalizing drug-related behaviors and creating social stigma by installing blue lights in public bathrooms rather than sharps containers may only serve to stop people from admitting the problem in its early stages and asking for help.

Do you think that stigma against addiction and those who struggle with the problem is driving the addiction epidemic in the United States? What do you think can be done to make positive changes that help save lives and assist families in crisis in connecting with the help they need to heal?