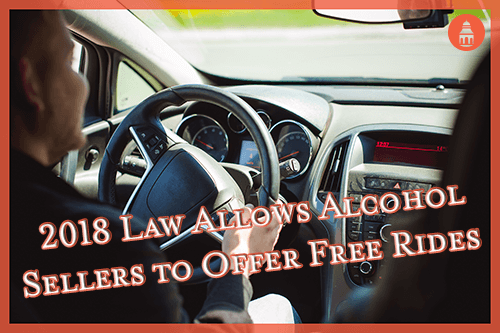 A new law goes into effect as of January 1 of this year. Bartenders and others who sell alcohol will now be allowed to offer free or discounted rides to their drinking customers. Previously, the giving of gifts or incentives of any kind in connection with alcohol purchases was regulated due in part to the idea that it may encourage people to drink more than was healthy or safe as a result of knowing that they did not have to drive home. However, with the passing of Assembly Bill 711, public safety goals have prevailed, and now alcohol sellers will be able to help keep the roads safer by offering free rides. While the law still prohibits giving vouchers or codes for free rides in exchange for purchasing an alcoholic beverage, it does allow for vendors to offer rides at the end of the evening.

This is a law that has already been enacted in 44 other states and the District of Columbia, so California is a step behind the times in addressing public safety. However, according to an analysis of the bill, the legislation was finally updated after Super Bowl 50 when beer vendors were not allowed to offer free rides after the game.

Though the new law may help to keep drunk drivers from getting behind the wheel and increase the safety of everyone on the road as a result, not everyone is on board.

A nonprofit based out of San Rafael called Alcohol Justice reportedly believes that the law will encourage people to drink more when they otherwise might not. Said one opponent of the bill: “If they get free transportation, maybe instead of two beers they have six. And when people over-consume alcohol, they make bad decisions.”

On the one hand, every time someone who is under the influence stays off the road – no matter why or how – it is a great thing. The individual is more likely to arrive alive at their destination, and others on the road are not subject to their erratic and dangerous driving. It saves lives on the road, without a doubt.

On the other hand, it is true that there will likely be cases where people choose to drink more than they might have otherwise because they know they do not have to worry about a ride home. However, it is unlikely that it will very often be the case that someone will choose to ditch their car if they drove to the event or establishment, deciding in the moment to continue drinking if they had not already made other arrangements. They may plan in advance to let the drinks pour without a plan if they know they have a safe ride home, but that still does not guarantee that this will become the new pastime of choice or that it will develop into a substance abuse habit.

What it does guarantee is that the roads will be safer, and those who simply want to get home without dying will have a better likelihood of making that happen.

Death Due to Alcohol-Related Disorders vs. Drunk Driving

The crux of the argument seems to be whether or not laws should prioritize the immediate health of those who may choose to drive while intoxicated as well as innocent people on the road or the health of the people who may end up developing a substance use disorder, heart disease, certain cancers, or other chronic and fatal health ailments that often come with heavy and/or binge drinking. More than 10,000 people died in a drunk driving accident in California between 2003 and 2012, according to the Centers for Disease Control (CDC) – completely preventable deaths. But rates of alcohol-related disorders are rising as well. Both are clearly serious issues, but one involves saving the lives of people who do not abuse alcohol as well as the person who might get behind the wheel, giving both a chance to live another day and make positive and healthy choices.

Do you think that laws like these encourage poor health choices among those who may be susceptible to the development of an alcohol use disorder? Do you think it is focused more on the benefits of small business, like alcohol purveyors and ride-sharing companies, than it is on the health of the individual?