Is There a Lethal Dose of Ambien? (Overdose Information)

Ambien (active ingredient zolpidem) is a mild hypnotic or sedative drug that is most commonly prescribed to assist people with difficulties sleeping. The drug is designed to initiate sleep and works very similarly to the benzodiazepines, a class of stronger central nervous system depressant drugs.

The major mechanism of action for zolpidem products is to facilitate the availability of the major inhibitory neurotransmitter in the central nervous system, GABA (gamma-aminobutyric acid). When the neurons in the brain release GABA, the immediate effect is a decrease in the firing rates of other neurotransmitters that may have more excitatory effects. This results in feelings of sedation, a decrease in anxiety, a feeling of calm, etc.

Sleep aids like Ambien are not designed to be long-term solutions to problems with insomnia or restless sleep. Instead, these drugs are designed to help individuals sleep while they develop other behavioral-based strategies and skills that can assist them. One of the major issues with drugs like zolpidem is that tolerance to the drug develops rapidly. 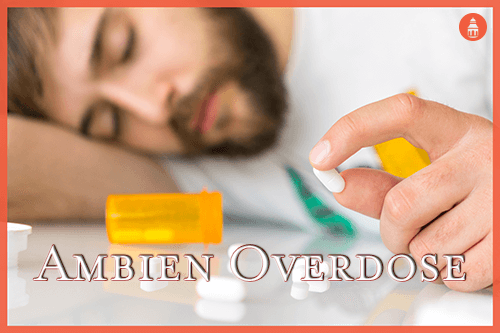 The individual’s system deals with the presence of the drug by increasing the production of substances (e.g., neurotransmitters, hormones, etc.) that counteract the effects of the drug when it is in the system. This is a natural process that occurs in order for an individual’s body to maintain a stable level of functioning (homeostasis). Thus, as a person takes a drug like Ambien, their body reacts to the drug in a manner that results in the effects of the drug becoming decreased over time. The person finds that they need more of the drug to get the same effects they once got due to this normal physical process.

Tolerance to drugs like Ambien develops very rapidly, and the effectiveness of the drug in its prescribed doses begins to decrease over time in most people.

When tolerance develops for people who use drugs for medicinal reasons, physicians can adjust the dosage slightly, and there are often few complications. When a person abuses a drug, they typically use much higher doses of the drug than are prescribed for medical reasons, use it more often, and may mix it with other drugs, resulting in a complicated situation where tolerance increases rapidly and produces numerous problems.

Ambien Use and Abuse

Ambien’s effects also include inducing a mild feeling of euphoria or wellbeing, sedation, etc., that may often be sought by people who abuse drugs. Ambien is the most used of the sedative-hypnotic drugs, according to data provided by the Substance Abuse and Mental Health Services Administration (SAMHSA).

According to estimates based on data collected by the government, it appears that the drug has a mild rate of misuse compared to other central nervous system depressants:

The information that is provided on use and misuse of drugs by SAMHSA represents some of the most reliable information regarding potential abuse of many different prescription medications and illicit drugs. However, it should be understood that these are estimates based on survey data, and there is always some level of error in these types of estimates. Nonetheless, it can be speculated that zolpidem products have a fair potential for abuse.

The DEA classifies zolpidem products as Schedule IV controlled substances, indicating that zolpidem is a drug that has potential medical benefits but can lead to physical dependence in people who use it on a regular basis (developing both tolerance and withdrawal syndromes), is a possible drug of abuse, and should only be taken under the supervision of a physician.

Of course, when the drug is taken under the supervision of a physician, the doctor can alter these doses depending on the reaction of the specific person and the need for more sedation to help the person fall asleep or to reduce the sedative effects if people find the drug makes them groggy in the morning. Based on information provided by numerous professional sources, women eliminate zolpidem products from their system at a much slower rate than men. Due to differences in physiology, women respond to lower doses of the drug.

Zolpidem is known to have a fast onset of action; once a person takes it, the drug works quickly. It also has a short half-life; it is eliminated from the body very quickly. The maximum recommended dose is 10 mg. Even though the drug is eliminated relatively quickly, the person needs at least 7-8 hours of sleep to allow the drug to be eliminated from their system so there are no aftereffects. Being under the influence of a central nervous system depressant drug like Ambien and attempting to operate machinery, such as driving an automobile, can be potentially dangerous because the drug affects an individual’s judgment, response times, and motor coordination. This means that when people use the drug and then attempt to go about their daily routine the following day, the drug should be mostly eliminated from their system to ensure that they do not suffer from residual effects of the drug.

The general effects of Ambien include:

Potential side effects occur in a small number of people who use the drug. Some of these include:

The recommended dosages of Ambien indicate that very small amounts of the drug are used for medical purposes. Individuals who abuse the drug will often use significantly higher doses than those that are recommended. According to SAMHSA and the National Institute on Drug Abuse (NIDA), zolpidem products are commonly misused and abused with other drugs like alcohol, other central nervous system depressants (e.g., benzodiazepines, prescription pain medications, etc.), cannabis products, and even stimulants to produce a mixed effect of stimulation and sedation. The overdose potential of zolpidem is increased when it is used in conjunction with other drugs, but this potential is particularly increased when it is used with drugs that have like effects or similar mechanisms of action.

The effects of an overdose on Ambien consist of a dangerous enhancement of its medicinal effects. Symptoms include:

Based on the prescribing information and reports in the literature (see below), it appears that significantly high amounts of Ambien would be required to produce a fatal overdose in most people. Lethal doses of zolpidem are dependent on several factors, such as the person’s body weight, their tolerance level to the drug, their gender, and the use of any other drugs in conjunction with Ambien. Taking amounts of the drug greater than 150 mg of zolpidem per kilogram of an individual’s body weight is most likely going to be fatal. This means that a person weighing 150 pounds would suffer a fatal overdose of zolpidem when taking 10,200 mg of the drug; however, the lethal dose is significantly reduced when Ambien is combined with other central nervous system depressant drugs like alcohol or prescription pain medications.

There are numerous reports of overdoses of zolpidem in the research literature. For instance:

Because Ambien is a central nervous system depressant, anyone who takes too much of the drug may suffer from serious oxygen deprivation to the brain. This can result in irreparable brain damage and even death. Mixing Ambien with other drugs can result in an enhancement of this effect, particularly if the drugs have similar effects to zolpidem. Mixing zolpidem products with other drugs also increases the potential for other rare side effects such as hallucinations and/or seizures.

If a person is suspected of overdosing on Ambien or other products with zolpidem, there are specific steps to take:

The formal treatment protocol for an overdose of zolpidem would include:

Based on the research literature, if a person who has taken a potentially dangerous amount of Ambien receives treatment quickly, the outcome can be favorable. Following recovery from the overdose and investigation to determine if the overdose was intentional (e.g., a suicide attempt) or accidental, additional treatment would be recommended. Depending on the findings, aftercare might involve treatment for depression or suicidality and most likely treatment for substance abuse.